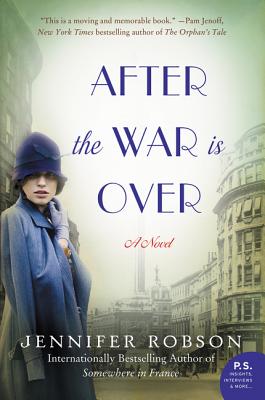 After the War is Over


Praise For After the War is Over: A Novel…

“A glorious journey from grief to celebration. Once I started reading, I couldn’t put this novel down. The story is engaging, memorable and beautifully imagined.” — Jeanne Mackin, author of The Beautiful American

“I loved this book! Jennifer Robson is a gifted, compelling storyteller who creates memorable characters. In this novel she perfectly captures the hopes and fears of a generation in the turbulent times of post-war Britain. I look forward to her next!” — Hazel Gaynor, New York Times bestselling author of The Girl Who Came Home

“Robson captures the atmosphere of post-WWI England beautifully, portraying the changing social and political climate, as well as the rebuilding of the country in the aftermath of the Great War. Calmly and compassionately rendered, realistic and romantic, After the War is Over is a wonderful testament to its survivors.” — RT Book Reviews

Although Charlotte is the Oxford-educated daughter of an upper-middle-class clergyman, she seems certain that there is a huge gulf in status between her and Edward. Do you feel that was truly the case? Or is this more a reflection of her own feelings of inadequacy?

Why do you think Charlotte is so devoted to her work? Do you admire her for her tenacity, or do you pity her for neglecting her personal happiness?

Do you agree with Charlotte’s decision to keep her friendship with John Ellis purely platonic?

How do you think you would have coped with the difficulties of the post-war period? Would you have been able to set them aside, as does Norma? Or would you be more like Meg and Rosie, and find it impossible to forget?

What did you think of the inclusion of Eleanor Rathbone, a real-life historical figure, in the novel? Do you like it when writers blend history with fiction in this manner? Or do you prefer the characters in a novel to be entirely fictitious?

Were you surprised that it takes so long for Edward’s friends and family to realize that he needs help? Do you think this is typical of veterans who suffered from psychological trauma at that time?

Do you feel that the gains made by women during the war were entirely lost in the postwar period? Do you think the war helped to accelerate change in any measurable way?

If you could choose to be poor and happy in the Britain of 1919, or wealthy and unhappy, which would you choose? And why?

Do you feel that Edward will be able to maintain his sobriety? Or will his experiences during the war forever haunt him?

Charlotte and Lilly each took action during the war in their roles as nurse and WAAC. Which of the two women is most changed by her experiences? Which role do you think

you would have taken on if given the choice?