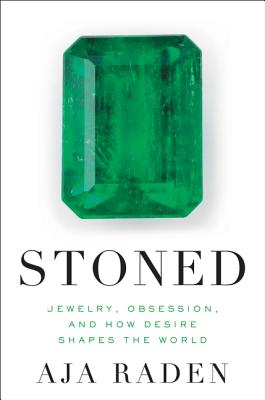 Jewelry, Obsession, and How Desire Shapes the World

As entertaining as it is incisive, Stoned is a raucous journey through the history of human desire for what is rare, and therefore precious.

What makes a stone a jewel? What makes a jewel priceless? And why do we covet beautiful things? In this brilliant account of how eight jewels shaped the course of history, jeweler and scientist Aja Raden tells an original and often startling story about our unshakeable addiction to beauty and the darker side of human desire.

What moves the world is what moves each of us: desire. Jewelry—which has long served as a stand-in for wealth and power, glamor and success—has birthed cultural movements, launched political dynasties, and started wars. Masterfully weaving together pop science and history, Stoned breaks history into three categories—Want, Take, and Have—and explains what the diamond on your finger has to do with the GI Bill, why green-tinted jewelry has been exalted by so many cultures, why the glass beads that bought Manhattan for the Dutch were initially considered a fair trade, and how the French Revolution started over a coveted necklace.

Studded with lively personalities and fascinating details, Stoned tells the remarkable story of our abiding desire for the rare and extraordinary.


Praise For Stoned: Jewelry, Obsession, and How Desire Shapes the World…

“History enthusiasts will be entertained by Raden’s knowledge of famous names as well as her narrative approach to the topic. Occasional injections of humor will keep readers interested.”
— Library Journal

“Raden’s commentary on the often ugly side of human desire through the ages is consistently captivating, and her witty delivery makes the material shine.”
— Publishers Weekly

“Raden brings impeccable credentials to the task at hand. She also writes with a blithe and breezy deftness, peppering her narrative with snarky but substantive footnotes that recall the insouciance of Mary Roach. A gem of a study into all that enchants and bewitches.”
— Booklist

“Aja Raden must be a kick at dinner parties … She’s also an appealingly informal, effortless storyteller, fascinated by the stories she tells.”
— Seattle Times

“Money, power, sexual politics, and jewelry! Isn’t this what makes the world go ‘round? What more could I ask for in a book
— Madonna

“’Stoned’ has its own special vitreous luster, just as any emerald worth its salt - an illumination into what makes us irrationally human.”
— Minneapolis Star Tribune

Aja Raden studied ancient history and physics at the University of Chicago and, during that time, worked as the head of the auction division at famed House of Kahn Estate Jewelers. For more than seven years, she worked as a senior designer for Los Angeles–based fine jewelry company Tacori. Raden is an experienced jeweler and a trained scientist. She lives in Beverly Hills, California.