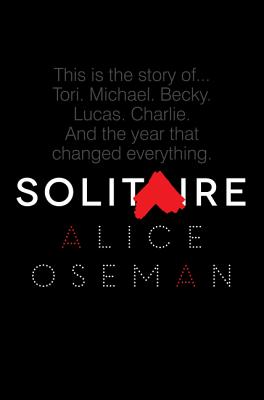 In Solitaire, Alice Oseman has brought to life a vivid, clever, and heartfelt portrayal of what it's like to be a teenager today. This stunning debut novel—which the Times (London) called "The Catcher in the Rye for the digital age"—is perfect for fans of Melina Marchetta, Stephen Chbosky, and Rainbow Rowell.

My name is Tori Spring. I like to sleep and I like to blog. Last year—before all that stuff with Charlie and before I had to face the harsh realities of exams and university applications and the fact that one day I really will have to start talking to people—I had friends. Things were very different, I guess, but that's all over now.

“Tori’s wry voice and dark humor provide a counterpoint to her descent into depression. A fascinating debut from an author to watch.”
— School Library Journal

“Oseman’s debut could put her among the great young adult fiction authors. Solitaire is a pleasure to read; Tori’s voice is incredibly relatable.”
— Voice of Youth Advocates (VOYA)

“Tori’s voice makes this story into a poignant yet blackly funny and even lively emotional journey. A deeply absorbing read.”
— Bulletin of the Center for Children’s Books

“Honest and authentic… with appeal to fans of John Green.”
— The Bookseller (London)

“In [Oseman’s] punky, depressive, epigrammatic, mordant heroine Tori Spring we have a Holden Caulfield for the internet age.
— The Times (London)

“Intrigue, suspense, and a fairly spectacular climax will appeal to teens asking the big questions.”
— ALA Booklist

Alice Oseman was born in 1994 in Kent, England. She completed a degree in English at Durham University in 2016 and is currently a full-time writer and illustrator. Alice can usually be found staring aimlessly at computer screens, questioning the meaninglessness of existence, or doing anything and everything to avoid getting an office job. Find out more about Alice and her books at www.aliceoseman.com.