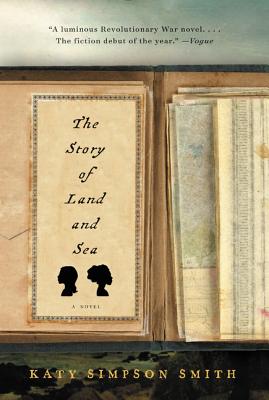 The Story of Land and Sea

“Simpson's debut novel is a quiet and radiant book. This story of love and loss is set during the later part of the American Revolutionary War and is told from the shifting viewpoints of a 10-year-old white girl, Tabitha; her family; their slave, Moll; and Moll's young son, Davy. While we can never know exactly what it felt like to be living on the North Carolina coast, on land and sea, at the end of the 18th century, Smith's graceful writing seems to capture the very essence of a different way of being in the world. This is an exceptionally written novel with characters whose hard lives are redeemed by moments of both beauty and mercy.”
— Sarah Goddin, Quail Ridge Books, Raleigh, NC
View the List

Set in a small coastal town in North Carolina during the waning years of the American Revolution, this incandescent debut novel follows three generations of family—fathers and daughters, mother and son, master and slave, characters who yearn for redemption amidst a heady brew of war, kidnapping, slavery, and love.

Drawn to the ocean, ten-year-old Tabitha wanders the marshes of her small coastal village and listens to her father’s stories about his pirate voyages and the mother she never knew. Since the loss of his wife Helen, John has remained land-bound for their daughter, but when Tab contracts yellow fever, he turns to the sea once more. Desperate to save his daughter, he takes her aboard a sloop bound for Bermuda, hoping the salt air will heal her.

Years before, Helen herself was raised by a widowed father. Asa, the devout owner of a small plantation, gives his daughter a young slave named Moll for her tenth birthday. Left largely on their own, Helen and Moll develop a close but uneasy companionship. Helen gradually takes over the running of the plantation as the girls grow up, but when she meets John, the pirate turned Continental soldier, she flouts convention and her father’s wishes by falling in love. Moll, meanwhile, is forced into marriage with a stranger. Her only solace is her son, Davy, whom she will protect with a passion that defies the bounds of slavery.

In this elegant, evocative, and haunting debut, Katy Simpson Smith captures the singular love between parent and child, the devastation of love lost, and the lonely paths we travel in the name of renewal.


Praise For The Story of Land and Sea: A Novel…

“Haunting…The Story of Land and Sea’s finely wrought language blends startling details of the everyday with a dreamy, aphoristic quality. The effect is to root the novel in its historical moment but to reach toward the universal in its exploration of love and grief.”
— Washington Post

“THE STORY OF LAND AND SEA is a memorable debut, rich with small, sharp moments of observation and understanding…A deeply introspective novel…Smith weaves intricate patterns of motive and action that result in heartbreaking moral ambiguity.”
— Oxford American

“Smith has a real gift for describing both hope and despair, which is one of the hardest things for an author to do well. She’s also gifted at drawing realistic, three-dimensional characters, particularly Tabitha and her grandfather…Smith is absolutely a writer to watch.”
— NPR

“The arresting prose, vividly original characters, and narrative drive with which Smith tells this story of desperate familial love on a long-ago coast provided this reader with several hours of pure pleasure and a rare glimpse of grace in a fictional world.”
— Anita Shreve

“A marvel. With prose as meticulous as brushstrokes, I can think of no other debut filled with such wonder, grace, and beauty…a tremendous achievement, a masterful exploration of parenthood and faith…An heir apparent to Michael Ondaatje and Marilynne Robinson, Katy Simpson Smith has written a book for all of us.”
— Paul Yoon

“Smith hasn’t merely evoked late-18th century American lives on shore and at sea-she’s invented them afresh…She doesn’t peddle the cozy illusion that, after all, these were people just like us; while reading THE STORY OF LAND AND SEA, we become just like them.”
— David Gates

“A pristine and powerful book…[Smith’s] voice is a poet’s and her vision is as expansive as the ocean, as the history in its depths. In her gorgeous and heart-rending first novel, she lays bare the hearts of parent and child, slave and master, and, most impressively, her readers.”
— Bret Anthony Johnston

“Smith’s narrative flawlessly blends the beauty and idealism of American independence with the hypocrisy and devastation that lay beneath it…Smith’s evocation of the humanity of both slave-owner and slave never falters, leading readers to a troubling and heartrending conclusion.”
— Huffington Post

“Smith lyrically but firmly draws us still back in time to reveal the lives that surround her character…Transporting, tragic, both tranquil and turbulent, Smith captures life in any time period—but especially this era of newfound freedoms—with grace and powerful prose.”
— Interview Magazine

“The grandiosity of this first novel’s title belies the wise and poignant understatement of the narrative’s language and form...Smith’s style is compressed yet contemplative, intensely lyrical in its descriptions of the 18th-century Southern cultural landscape.”
— Marilyn Stasio, New York Times Book Review

“Often, a book with sensational advance press doesn’t live up to the hype. Not so with Smith’s remarkable debut novel…Masterfully told with the assurance and grace of a mature artist, this novel marks the debut of an authentic, exciting new voice among American writers.”
— Clarion-Ledger (Jackson, MS)

“THE STORY OF LAND AND SEA is a striking debut novel that reads like poetry and will linger like mythology, as Simpson’s language and metaphors weave threads of magic through each sentence.”
— BookPage

“Morally resolute, emotionally nuanced, painstaking researched, and gorgeously expressed, Smith’s debut marks her as a historical novelist to look out for.”
— Huffington Post, Best Books Of The Year

“Hypnotic…Smith employs a style of impressively measured, atmospheric understatement in her unabashedly stark descriptions, and we thrill to watch her characters row stoically into a darkening future.”
— Elle

“With her preternaturally mature debut, Smith makes a persuasive bid to join the ranks of Hilary Mantel and Marilynne Robinson-people who have informed visions of history and the writing gifts to make them sing… Spartan, lyrical prose chimes in tune with austere times, wringing beauty from hard-bitten straits.”
— The Independent Weekly

“Smith’s soulful language of loss is almost biblical, and the descriptions of her characters’ sorrows are poetic and moving.”
— Publishers Weekly

“Smith’s spare prose and storytelling style is resonant of oral history or folk tales, and the early chapters focusing on John and his daughter Tabitha, and her desire for the sea, call to mind Sena Jeter Naslund’s AHAB’S WIFE.”
— Library Journal

“Smith’s poetic language and astonishing vision make these stories of loss and endurance vivid.”
— BBC Culture, One of "10 Best New Books to Read"

“With lucid prose, historical and cultural accuracy, and a set of complex yet relatable characters, this debut novel from Jackson native Katy Simpson Smith has been one of the best I’ve read this year…Like water, this story, its characters, and its words are fluid and powerful.”
— Lemuria Bookstore Blog

“For all her mastery of the willful moral ambiguity that lies in the hearts of her characters, Smith is equally adept at describing small but heartbreaking moments in relationships...It’s not only among the most assured debut novels in recent memory, it heralds the birth of a major new talent.”
— Chapter 16/Nashville

“With spellbinding storytelling and historical basis, [Katy Simpson Smith] draws readers into the literary sea with this debut novel…she knows her history well but also knows human nature, exposing it in another time in a way we can feel as truth.”
— Durham-Herald Sun

“Smith has written something wondrous and rare in her coruscating debut novel…In quiet, powerful language, The Story of Land and Sea takes us to a South that has been forgotten, blotted out by the stain of war, and breathes life into early history.”
— Philadelphia Inquirer