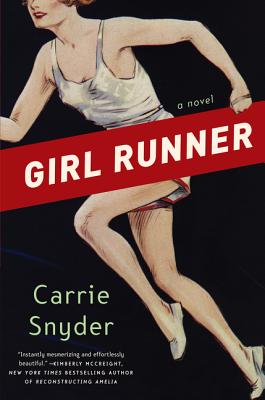 Resonant of Elizabeth Gilbert’s The Signature of All Things and Tracy Chevalier’s Remarkable Creatures, Girl Runner is an unforgettable, beautifully written novel that celebrates a woman born to reach beyond the limitations of her time.

As a young runner, Aganetha Smart defied everyone’s expectations to win a gold medal for Canada in the 1928 Olympics. It was a revolutionary victory, because this was the first Games in which women could compete in track events—and they did so despite opposition. But now Aganetha Smart is in a nursing home, and nobody realizes that the frail centenarian was once a bold pioneer.

When two young strangers appear asking to interview Aganetha for their film about female athletes, she readily agrees. Despite her frailty, she yearns for adventure and escape. And though her achievement may have been forgotten by history, her memories of chasing gold in Amsterdam remain sharp. But that triumph is only one thread in the rich tapestry of her life. Her remarkable story is colored by tragedy as well as joy, and in Girl Runner Carrie Snyder pulls back the layers of time to reveal how Aganetha’s amazing athleticism helped her escape from a family burdened by secrets and sorrow.

However, as much as Aganetha tries, she cannot outrun her past or the social conventions of her time. As the pieces of her life take shape, it becomes clear that these filmmakers may not be who they seem. . . .


Praise For Girl Runner: A Novel…

“Carrie Snyder has written an extraordinary, accomplished debut novel of love and family: a wonderful story of a free spirit forced to make difficult choices. Aggie Smart is a truly memorable heroine: she grabbed my hand on page one and never let go.”
— Sara Gruen, author of Water For Elephants and At The Water’s Edge

“Aggie’s strength and independence in a time of gender inequality will be an inspiration to readers in this poignant story of a life and its redemption.”
— Booklist

“Snyder tunes Aganetha’s voice so beautifully at each stage of her life that the comparisons to Elizabeth Strout’s unforgettable Olive Kitteridge are inevitable.”
— Minneapolis Star Tribune

“Infused with striking imagery and pearls of wisdom, Snyder’s novel attempts to capture how it feels to be a female athlete, an independent woman, and above all a runner.”
— Publishers Weekly

“[A] well-crafted meditation on aging and loss…. [Snyder’s] inspirational protagonist pushing the boundaries of what was acceptable for women in the first half of the 20th century makes this novel a winner.”
— Library Journal

“A fascinating novel about. . . a determined woman who lived life by her own standards.”
— Amy Steele, Entertainment Realm

“Throughout Girl Runner…the details and specificity enhance without distracting. What defines the novel is the depth of Aggie herself; her complexities, her desires and failures and her deep relationships are the book’s heart, authentic and beautifully wrought.”
— Edmonton Journal

“You don’t have to be an athlete to enjoy this mesmerizing novel.”
— Metro

“A well-paced and beautifully written story which culminates in an important reunion....Carrie Snyder writes a tribute to the early pioneers of women’s athletics.”
— Iron Mountain Daily News

“Girl Runner is a lyrical and achingly sad novel. An independent woman ahead of her time, Aganetha Smart is a fully realized, sympathetic character who will spur readers to think about aging, regret, and the difficult choices life often sends our way.”
— Books on the Table

Carrie Snyder’s Girl Runner was short-listed for the 2014 Rogers Writers’ Trust Fiction Prize. Her previous book, The Juliet Stories, was a finalist for the prestigious Governor General’s Literary Award and named one of the Globe and Mail’s Top 100 Books of the Year. Her first book, the short story collection Hair Hat, was short-listed for the Danuta Gleed Award for Short Fiction.