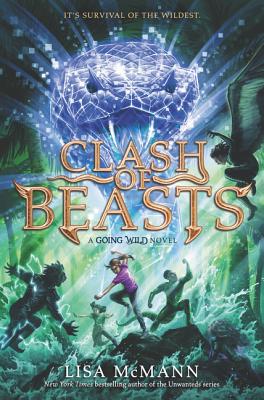 Lisa McMann, New York Times bestselling author of the Unwanteds, pulls out all the stops in this exhilarating third and final book in the Going Wild series! This middle grade adventure follows a group of kids with powers from the animal kingdom who form their own version of the Avengers and Justice League.

Charlie, Mac, and Maria managed to rescue the Project Chimera scientists from the devious Dr. Gray, but they couldn’t stop him. Now he’s closer than ever to enacting his dreadful master plan to transform all of humanity into a monstrous new species. And even worse, Kelly has betrayed her friends and joined forces with him.

To defeat their beastly foes, Charlie and the others are going to need help. Luckily, they just saved the creators of the bracelets that give them their unbelievable powers, and they’re about to get an upgrade. With even fiercer abilities, it’s finally time for these kids to unleash their wild sides and save the world.

Perfect for fans of Rick Riordan and Brandon Mull—as well as anyone who loves superhero movies like Wonder Woman and Black Panther—Going Wild is an action-packed series that blends science fiction, fantasy, and the animal kingdom into one unputdownable adventure.

Praise for the GOING WILD series: “A gripping, can’t-put-down trilogy. Once again, Lisa McMann demonstrates her remarkable ability to create action-packed fantasies filled with humor and heart. Kids will go wild for Going Wild!”
— Katherine Applegate, #1 New York Times bestselling author of the Newbery Medal winner The One and Only Ivan

“Going Wild has it all—drama, soccer, and superpowers, with a heroine who is super, sure, but also incredibly real and down-to-earth. As much as readers will be amazed by what Charlie can do, they’ll cheer for her because she’s the superhero next door.”
— Gordon Korman,  #1 New York Times bestselling author of the Masterminds series, Ungifted, and Supergifted

“Like no other writer, Lisa McMann creates real, lovable characters and then yanks their lives inside out with nail-biting suspense, a shocker at every turn, and stakes that climb to crazy, impossible heights. I hope it’s not rude to beg for the sequel, because the line begins here.”
— Peter Lerangis, New York Times bestselling author of the Seven Wonders series and Max Tilt

“A fast-paced adventure with a very likable heroine. Fans of Rick Riordan and Brandon Mull will not be disappointed.”
— School Library Journal

“Blending action, fantasy, and sci-fi with tween angst, this is poised to be a hit with the legions of fans of the Unwanteds series.”
— ALA Booklist

“Filled with action, adventure, and a good dollop of wish fulfillment, McMann’s superhero origin story should capture the imagination of any reader who wonders what it would be like to be more than just an average kid.”
— Publishers Weekly

Lisa McMann is the New York Times bestselling author of numerous books for kids and teens, including the middle grade dystopian fantasy series The Unwanteds. She lives with her family in Phoenix, Arizona. You can follow Lisa on Twitter and Facebook or visit her at www.lisamcmann.com.