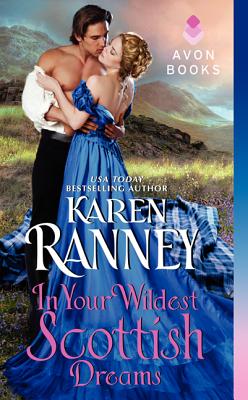 In Your Wildest Scottish Dreams (The MacIains #1)

Seven years have passed since Glynis MacIain made the foolish mistake of declaring her love to Lennox Cameron, only to have him stare at her dumbfounded. Heartbroken, she accepted the proposal of a diplomat and moved to America, where she played the role of a dutiful wife among Washington's elite. Now a widow, Glynis is back in Scotland. Though Lennox can still unravel her with just one glance, Glynis is no longer the naïve girl Lennox knew and vows to resist him.

With the American Civil War raging, shipbuilder Lennox Cameron must complete a sleek new blockade runner for the Confederate Navy. He cannot afford any distractions, especially the one woman he's always loved. Glynis's cool demeanor tempts him to prove to her what a terrible mistake she made seven years ago.

As the war casts its long shadow across the ocean, will a secret from Glynis's past destroy any chance for a future between the two star-crossed lovers?


Praise For In Your Wildest Scottish Dreams (The MacIains #1)…

“Ranney’s clever, carefully plotted novel reflects the power of her storytelling. She combines an unusual backdrop with unforgettable characters to deliver an exciting, poignant and passionate romance that promises to begin a memorable series.”
— Romantic Times Magazine, 4 1/2 Stars