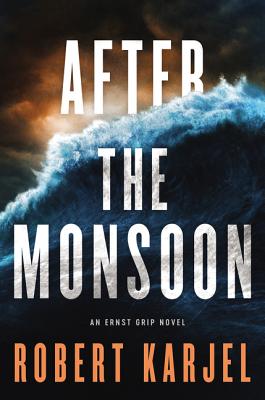 From the author of the international bestseller The Swede comes an electrifying thriller set in the terrorist- and pirate-infested world of the Horn of Africa—where the sea caresses the desert, alliances shift like sand, and a Swedish detective can count on nothing but his own shrewdness to survive.

A Swedish army lieutenant drops dead on a shooting range in the desert. Was it an unfortunate accident—or something more nefarious? Ernst Grip, an agent of the Swedish security police, is sent to the Horn of Africa to find out. Once he’s on the ground, however, he quickly discovers he’s on his own. No one wants him snooping around—especially not the U.S. Embassy’s CIA station. Which is no surprise, given that military transport planes are leaving from the base carrying untraceable pallets loaded with cash.

What’s more, Grip’s investigation is complicated by another dangerous situation. Somali pirates have kidnapped a wealthy Swedish family during the adventure of a lifetime: a sailing trip from Sweden to the Great Barrier Reef. Why, Grip wonders, is no one back home willing to pay the ransom in order to save these innocent lives?

Solving the mystery of the soldier’s death isn’t the end of Grip’s involvement—it’s a tipping point that leads him deep into a web of intrigue, greed, and dark dealings ensnaring both allies and enemies . . . and a world where no one can be trusted.

After the Monsoon explores the tough compromises made every day in pursuit of the greater good. How do you know which is the lesser of two evils? And what is the cost of betraying one interest to save another? In this provocative, pulse-pounding, and sophisticated thriller, Robert Karjel vividly creates a world in which the stains of innocent blood cannot be cleansed, and the sins of good men forced to make impossible choices cannot be washed away.


Praise For After the Monsoon: An Ernst Grip Novel…

“Robert Karjel’s After the Monsoon is both Nordic noir and international thriller. The compelling characters and the suspense he creates kept me hooked until the very last page!”
— David Lagercrantz, New York Times bestselling author of The Girl in the Spider’s Web

“Karjel’s second novel to be translated into English is a solid, dependable work that makes us believe in its characters and situations; the author brings firsthand knowledge to his unusual story of Swedes in Africa.”
— Kirkus Reviews

“With its realistic characters, sophisticated plotting, and assured prose, this entry puts Karjel at the top of the thriller pack.”
— Publishers Weekly (starred review)

Robert Karjel was a lieutenant colonel in the Swedish Air Force for 25 years. His job as a helicopter pilot took him all over the world, from peace-keeping missions in Afghanistan to pirate-hunting in Somalia, and he is the only Swedish pilot who has trained with the U.S. Marine Corps and flown its attack helicopters. He is the author of The Swede, his first novel to be published in English, and one of the most sought-after motivational speakers in Sweden. He lives with his family outside of Stockholm.
or support indie stores by buying on