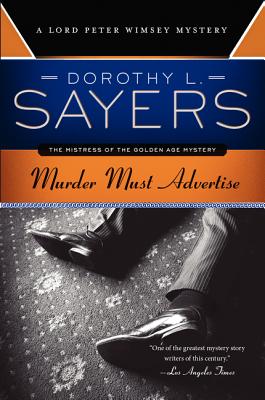 When executive Victor Dean dies from a fall down the iron staircase at Pym's Publicity, a posh London ad agency, Lord Peter Wimsey goes undercover to investigate. Before his tragic demise, the victim had tried to warn Mr. Pym, the firm's owner, about some scandalous behavior involving his employees.

Posing as a new copywriter, Wimsey discovers that Dean was part of an unsavory crowd at Pym's whose recreational habits link them to the criminal underworld. With time running out and the body count rising, Wimsey must rush to find the truth before his identity is discovered and a determined killer strikes again.


Praise For Murder Must Advertise: A Lord Peter Wimsey Mystery…

“One of the greatest mystery story writers of the twentieth century.”
— Los Angeles Times

“The Wimsey books are literate and delightful mysteries.”
— Chicago Tribune

“She brought to the detective novel originality, intelligence, energy and wit.”
— P.D. James

“I admire her novels ... she has great fertility of invention, ingenuity and a wonderful eye for detail.”
— Ruth Rendell