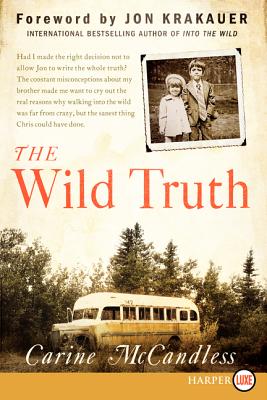 “One of the driving points of The Wild Truth is that [McCandless’s] famous, ultimately fatal journey of adventure and discovery was motivated in large part by a desire to escape his parents…Carine’s new book fleshes out the causes of Chris’s actions with much more detail and impact.”
— Outsideonline.com

“The Wild Truth is a moving narrative of domestic abuse, grief and survival, and for the perspective and revelations it contains, an essential additon to the Into the Wild story.”
— Newsweek

“Fiercely honest and gripping. . . . She honestly shares her successes and failures in work and relationships as she comes to the realization that she has tried to find in adult life what was lacking in her childhood: worth, strength, and unconditional love.”
— Publishers Weekly

“The Wild Truth is an important book on two fronts: It sets the record straight about a story that has touched thousands of readers, and it opens up a conversation about hideous domestic violence hidden behind a mask of prosperity and propriety.”
— NPR.org

“Helping her readers become more familiar with the overwhelming burdens caused by dysfunctional parents is one of The Wild Truth’s major achievements. [McCandless] touches each of us…[we] have a better sense of what drove her brother and compelled her to write about her own harrowing history.”
— Anchorage Press

“A powerful book…For me, reading it was like finding a crucial missing word in the middle of a crossword puzzle: once those letters were filled in, the answers to the blank spaces around them also cascaded into place.”
— Eva Holland, Vela Magazine
or
Not Currently Available for Direct Purchase
Copyright © 2020 American Booksellers Association