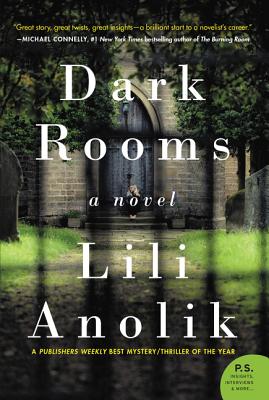 “As much as this is a crime drama, it’s also a coming-of-age novel. The plot is high-suspense, but it’s the strength of the characters—and the strength of Anolik’s hypnotic, unfussy prose—that gives the book its lasting force. Wholly absorbing and emotionally rich...Deeply satisfying.”
— Kirkus Reviews

“Insightful [and] complex ...Anolik’s haunting debut is tough to put down and will stay with you for a long time. The author’s characters and tone recall Donna Tartt’s The Secret History or Kimberly Pauley’s Ask Me.”
— Library Journal (starred review)

“One hell of a first novel. Dark Rooms is an elegant work of crime fiction with a plot as well-drawn as the characters who inhabit it. It’s a fine murder mystery as well as an exploration of loss and identity...Think Megan Abbott meets Twin Peaks.”
— Gregg Hurwitz, New York Times-bestselling author of Don't Look Back

“Suspenseful, sad and, shattering...Whether or not you believe in ghosts, Anolik’s debut will haunt you.”
— Publishers Weekly (starred review)