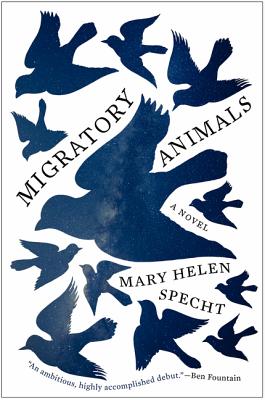 “Specht's novel weaves together stories of science and art, friends faraway and family returned. Migratory Animals is a coming-of-age tale for grownups, a reminder that growing pains don't stop as we age and change and become who we're supposed to be -- or who we hope to be. Flannery and her friends will grab hold of you and not let go until the last page has been turned.”
— Annie B. Jones, The Bookshelf, Thomasville, GA
View the List

A powerful debut novel about a group of 30-somethings struggling for connection and belonging, Migratory Animals centers on a protagonist who finds herself torn between love and duty.

When Flannery, a young scientist, is forced to return to Austin from five years of research in Nigeria, she becomes split between her two homes. Having left behind her loving fiancé without knowing when she can return, Flan learns that her sister, Molly, has begun to show signs of the genetic disease that slowly killed their mother.

As their close-knit circle of friends struggles with Molly’s diagnosis, Flannery must grapple with what her future will hold: an ambitious life of love and the pursuit of scientific discovery in West Africa, or the pull of a life surrounded by old friends, the comfort of an old flame, family obligations, and the home she’s always known. But she is not the only one wrestling with uncertainty. Since their college days, each of her friends has faced unexpected challenges that make them reevaluate the lives they’d always planned for themselves.

A mesmerizing debut from an exciting young writer, Migratory Animals is a moving, thought-provoking novel, told from shifting viewpoints, about the meaning of home and what we owe each other—and ourselves.


Praise For Migratory Animals: A Novel…

“Migratory Animals brings to the page an astonishing admixture of ambitiousness, originality, and authority that’s rare among established writers and exceptional for a first effort. . . . Richly layered and psychologically incisive, it is that rare first novel that leaves the reader clamoring for the next.” — The Boston Globe

“A promising debut. . . . One of the novel’s wonders is the way Specht illustrates her characters -- not with great globs of exposition, but with quick, economical brushstrokes.” — Dallas Morning News

“An ambitious, highly accomplished debut. . . . Specht moves among a deep cast of characters and corresponding perspectives with absolute mastery. . . . Most important, and impressive, is Specht’s sure handling of the interior life.” — Ben Fountain, author of Billy Lynn's Long Halftime Walk

“A novel of tremendous scope and insight that succeeds both as an exploration of larger global concerns and an acute examination of the most intimate parts of our lives. Mary Helen Specht is a terrific writer -- passionate and generous, wry and insightful. A very moving debut.” — Molly Antopol, author of The UnAmericans

“A memorable novel. . . . The characters represent a specific place and a specific era, but their travails and truths are universal and timeless.” — San Antonio Express-News

“Mary Helen Specht’s lyrical novel reminds me of the work of both Claire Messud and Barbara Kingsolver. . . . A luminous debut. . . . Rich with love and heartbreak, it’s the book I’ll be wanting to share with all my friends.” — Amanda Eyre Ward, author of How to Be Lost

“An emotionally nuanced debut. . . . The men and women of Mary Helen Specht’s imagination inhabit a world of breathtaking vividness, where life’s pains and pleasures ripple through to marvelous effect. A heartbreaking, edifying, and resonant work of art.” — Keija Parssinen, author of The Ruins of Us

“In prose as quirky and elegant as its characters, Specht proves that -- after confusion, missteps, even denial -- a village can embrace you. . . . This big, dreamy novel flies by as swift as time.” — Debra Monroe, author of On the Outskirts of Normal

“A beautifully precise group portrait in which Mary Helen Specht manages to capture not just a particular set of characters but a generational mood and moment. . . . Without forcing any answers, it asks a powerful, probing question: how should you behave when life suddenly gets real?” — Stephen Harrigan, author of Remember Ben Clayton

“Specht’s vivid debut probes the nature of family, the notion of home, and the tender burdens of both. . . . Specht’s distinctive prose -- rich with sharp observations, nimble language, and lyrical imagery -- makes the novel a quirky and memorable read.” — Publishers Weekly

Mary Helen Specht's work has appeared in numerous publications, including the New York Times and Colorado Review. A winner of the Richard Yates Short Story Award, among other prizes, she is a former Fulbright Scholar to Nigeria and Dobie-Paisano Writing Fellow. She earned an MFA in fiction from Emerson College and now teaches creative writing at St. Edward's University in Austin, Texas.