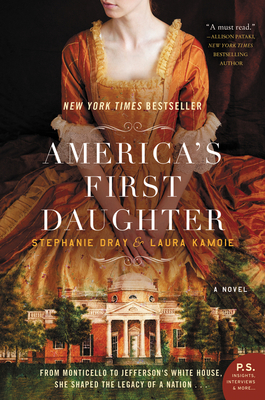 “America’s First Daughter brings a turbulent era to vivid life. All the conflicts and complexities of the Early Republic are mirrored in Patsy’s story. It’s breathlessly exciting and heartbreaking by turns-a personal and political page-turner.” — Donna Thorland , author of The Turncoat

“[A] triumphant, controversial, and fascinating plunge into the complexities of Revolutionary America, where women held power in subtle ways and men hid dangerous secrets. You’ll never look at Jefferson or his legacy the same way again.” — C.W. Gortner, bestselling author of Mademoiselle Chanel

“Authors Dray and Kamoie have performed tireless research. Whether it’s detailing Patsy’s life as a debutante in Paris, where she dances with Lafayette and witnesses the first flickers of the French Revolution, or recounting the world of a Virginia plantation, they’ve done their homework.” — Kirkus Reviews

“This is a stunning historical novel that will keep you up late, hoping the engaging story never ends. Highly, highly recommended!” — Historical Novel Society, Editor's Choice