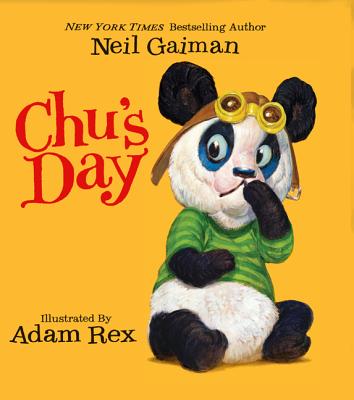 Chu is a little panda with a big sneeze. When Chu sneezes, bad things happen. But as Chu and his parents visit the library, the diner, and the circus, will anyone hear Chu when he starts to feel a familiar tickle in his nose?

Chu's Day is a story that shows how even the smallest child can make big things happen.


Praise For Chu's Day Board Book…

“Kids will find the idea of a monstrous sneeze funny, and it may prompt some attempts of their own. Rex’s richly detailed illustrations are brimming with fantastic touches. Share this one at toddler storytime for lots of giggles, or one-on-one for spotting details in the art.”
— Booklist

“Gaiman’s comic timing gets a boost from strategic book design and from Rex’s hyperreal paintings, which emphasize Chu’s round, fuzzy form and apparent harmlessness. Gaiman and Rex deliver a classic one-two-three punch, making hay from the notion that a cuddly baby panda is not to be trusted.”
— Publishers Weekly (starred review)