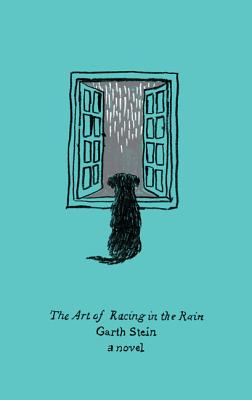 “One of those stories that may earn its place next to Richard Bach’s Jonathan Livingston Seagull, Paulo Coelho’s The Alchemist, and Yann Martel’s Life of Pi.”
— Portland Oregonian

“The perfect book for anyone who knows that some of our best friends walk beside us on four legs; that compassion isn’t only for humans; and that the relationship between two souls...meant for each other never really comes to an end.”
— Jodi Picoult

“The Art of Racing in The Rain has everything: love, tragedy, redemption, danger, and—most especially—the canine narrator Enzo. This old soul of a dog has much to teach us about being human. I loved this book.”
— Sara Gruen, Author of Water for Elephants

“The Art of Racing in The Rain has everything: love, tragedy, redemption, danger, and--most especially--the canine narrator Enzo. This old soul of a dog has much to teach us about being human.”
— Sara Gruen, Author of Water for Elephants

“I savored Garth Stein’s The Art of Racing in the Rain for many reasons: a dog who speaks, the thrill of competitive racing, a heart-tugging storyline, and--best of all--the fact that it is a meditation on humility and hope in the face of despair.”
— Wally Lamb, Author of She's Come Undone and I Know This Much Is True