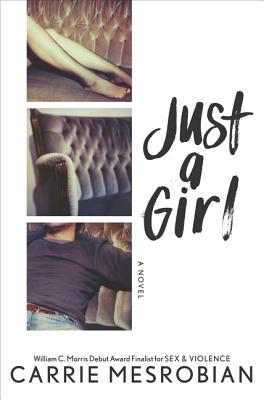 By her senior year of high school, Rianne has exhausted all the fun there is to have in small-town Wereford, Minnesota. Volleyball season is winding down, the parties feel tired, and now that she’s in a serious relationship with reformed player Luke Pinsky, her wild streak has ended. Not that she ever did anything worse than most guys in her school...but she knows what everyone thinks of her.

Including her parents. Divorced but now inexplicably living together again, Rianne wonders why they’re so quick to point out every bad choice she’s making when they can’t even act like adults—or have the decency to tell Rianne whether or not they’re getting back together. With an uncomfortable home life and her once-solid group of friends now dissolving, the reasons for sticking around after high school are few. So why is Rianne locking step when it comes to figuring out her future?

That’s not the only question Rianne can’t answer. Lately she’s been wondering why, when she has a perfect-on-paper boyfriend, she wants anything but. Or how it is that Sergei, a broken-English-speaking Russian, understands her better than anyone who’s known her all her life? And—perhaps the most troubling question—why has Rianne gotten stuck with an “easy girl” reputation for doing the same exact things as guys without any judgment?

Carrie Mesrobian, acclaimed author of Sex & Violence and Cut Both Ways, sets fire to the unfair stereotypes and contradictions that persist even in the twenty-first century.


Praise For Just a Girl…

“There’s nothing simple about being just a girl, and this resonant, thoughtful novel makes that abundantly, stunningly clear.”
— Booklist (starred review)

“Mesrobian offers another honest and emotionally charged look at the secret lives of teenage girls. Raw and never sensationalized, this title is for readers who like contemporary YA fiction with a realistically dark edge.”
— School Library Journal