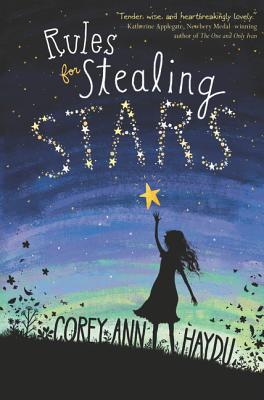 “A lyrical story of love and loss. The way the sisters fight and love in equal measure, as well as their basic need for one another, rings poignantly true in this touching and heartwarming story, which contains a ‘tiny bit of magic, right here in the real world.’” —Booklist (starred review)

In the tradition of Sharon Creech and Wendy Mass, Corey Ann Haydu's sparkling middle grade debut is a sister story with a twist of magic, a swirl of darkness, and a whole lot of hope.

Silly is used to feeling left out. Her three older sisters think she's too little for most things—especially when it comes to dealing with their mother's unpredictable moods and outbursts. This summer, Silly feels more alone than ever when her sisters keep whispering and sneaking away to their rooms together, returning with signs that something mysterious is afoot: sporting sunburned cheeks smudged with glitter and gold hair that looks like tinsel.

When Silly is brought into her sisters' world, the truth is more exciting than she ever imagined. The sisters have discovered a magical place that gives them what they truly need: an escape from the complications of their home life. But there are dark truths there, too. Silly hopes the magic will be the secret to saving their family, but she's soon forced to wonder if it could tear them apart.


Praise For Rules for Stealing Stars…

★ “[A] lyrical story of love and loss... The way the sisters fight and love in equal measure, as well as their basic need for one another, rings poignantly true in this touching and heartwarming story, which contains a ‘tiny bit of magic, right here in the real world.’”
— Booklist (starred review)

“Haydu makes skilled use of her story’s fantastical overlay to create a haunting narrative about the ways family members can fail-but also support-each other.”
— Publishers Weekly

“Tender, wise, and heartbreakingly lovely, this story is as brilliant as a stolen star, and every bit as magical. Prepare to be enchanted.”
— Katherine Applegate, Newbery-award winning author of The One and Only Ivan

“A gorgeous, profound, deeply felt book that lovingly explores intricate sibling relationships, the crushing weight of family secrets, and the delicate magic of hope. Rules for Stealing Stars is sublime.”
— Anne Ursu, author of Breadcrumbs and The Real Boy

“Silly and her sisters are flesh-and-bone characters; they gripped me by my very heart and pulled me into their tense and mysterious family story. With beguiling moments of magical realism and engaging turns of phrase, Corey Ann Haydu has crafted a glowing middle grade debut.”
— Leslie Connor, award-winning author of Waiting for Normal and Crunch