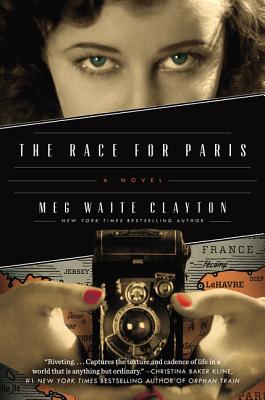 “Ambitious, riveting…. Deftly weaving fact and fiction, Clayton captures the texture and cadence of daily life in a world that is anything but ordinary.” — Christina Baker Kline, New York Times bestselling author of Orphan Train

“This marvelous novel has everything-adventure, romance, history, and most of all heart. Every reader who enters this ‘Race’ will come out a winner.” — Ann Packer, Bestselling Author of Swim Back to Me and The Children's Crusade (forthcoming)

“Clayton introduces us to a world we never knew existed and then makes it utterly compelling. I loved the story of these brave women, the risks they took, the ambitions that fed them. Moving and gripping, it is a thriller of women and war.” — Mary Morris, award-winning author of The Jazz Palace and The River Queen

“Clayton’s most ambitious undertaking to date may be fiction, but it’s impeccably researched, offering a striking glimpse into what life was like for the predecessors of some of today’s most famous female journalists. A must for World War II buffs and fans of sharp, boundary-busting female characters.” — Kirkus Reviews

“A smart, engrossing, and ultimately heartbreaking story…Clayton gives us a story of friendship, love, and sacrifice that no one who has the pleasure of reading it will soon forget. I loved this book.” — Sara Gruen, #1 New York Times bestselling author of Water for Elephants and At the Water’s Edge

“Thrilling…a dangerous, fast-moving adventure. Well-researched, the novel puts the women in the path of bombs, gunfire, gender bias and arcane military restrictions; Clayton models her characters on real-life pioneers—Martha Gellhorn, Lee Miller and other women who broke barriers to get the story.” — San Jose Mercury News

“Clayton’s narrative is sophisticated and well structured…. Her description of the liberation of Paris is riveting. She skillfully reveals the inadequacies of one photo or one article to capture the full magnitude of such an event. And her prose stirs the imagination.” — San Antonio Express–News

“Involving and thoroughly researched.... Clayton tells a story that will draw women’s-fiction readers as well as historical-fiction and WWII devotees.... Entertaining and enlightening reading.” — Booklist

“Clayton’s multilayered, fast-paced novel is as dramatic as any newspaper account. There are wonderful historical details and plenty of danger and action with enough romance to satisfy adventure readers as well as WWII romance aficionados.” — RT Book Reviews

“An amazing story of friendship and courage…. Meg Waite Clayton paints such a poignant picture of these three individuals that I found myself holding my breath.…You’ll be left exhausted…at the end, but it will be so worth it.” — Bookreporter.com

“Clayton’s gripping tale was inspired by the women writers and photographers who broke through bureaucratic and gender barriers to report from the front lines.... There’s danger, secrets, and romance in the story, along with the underlying deep need of Jane, Liv, and Fletcher, to portray the truth about the war.” — Historical Novel Reviews, Editors’ Choice