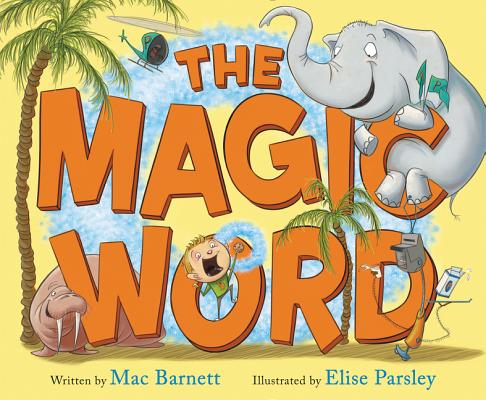 When Paxton C. Heymeyer’s babysitter tells him to say the magic word, she could never have imagined that what would happen next would be a walrus chasing her, an elephant in the living room playing cards, and a full water park and moat in the front yard. And that’s just the beginning…


Praise For The Magic Word…

“A subversive take on the topic of manners that still manages to deliver a message about human decency.” — The Horn Book

“[A] wild, relatable fantasy...This telling will resonate with (and tickle) the intended audience.” — Booklist

Praise for EXTRA YARN: “There’s nothing to say but perfect.” — Lane Smith, New York Times bestselling author of IT'S A BOOK

Praise for THE CLOCK WITHOUT A FACE: “Ready to get your mind blown? Then dig into this.” — Booklist (starred review)

Praise for THE CLOCK WITHOUT A FACE: “Clock seamlessly blends the playfulness of the kids’ books we wished we had and the sophistication of [McSweeney’s] trademark design.” — Time Out Chicago

Praise for THE CLOCK WITHOUT A FACE: “Part The Westing Game, part Masquerade, this board book mystery lures readers in with its pentagonal shape, dry humor, and pages of intricate details.” — Publishers Weekly

Praise for OH NO! (Or How My Science Project Destroyed the World): “Santat’s brilliantly hued digital illustrations are the perfect foil for Barnett’s almost-wordless tale of a science project gone awry. A must-have.”- — Kirkus Reviews (starred review)

Elise Parsley is the bestselling author and illustrator of If You Ever Want to Bring an Alligator to School, Don’t! She studied drawing and creative writing at Minnesota State University Moorhead, and more of her work can be found at www.eliseparsley.com. Elise and her husband live in South Dakota.