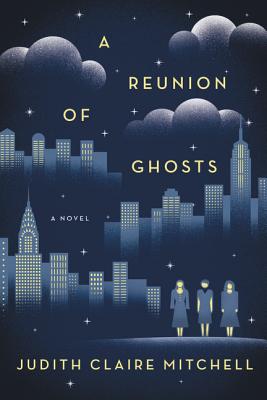 A Reunion of Ghosts

“'The sins of the fathers are visited upon the children to the third and fourth generations.' These are the words that the Alter sisters live by and the reason they have chosen to die at their own hands. Lady, Vee, and Delph Alter have written a suicide note that turns out to be a family history. The sisters are descendants of Lenz, a chemist and the creator of the poison gas that was first used in WWI, and his wife, Iris, the first woman to earn a Ph.D. in chemistry and the first in the family to commit suicide. A Reunion of Ghosts is a captivating chronicle of a family and the weight of consequences that grow heavier with time.”
— Jennifer Steele, Boswell Book Company, Milwaukee, WI
View the List

“The Alter sisters are mordant, wry, and crystalline in wit and vision; it is a tremendous pleasure to rocket through generations of their family histories with them.” —Lauren Groff, New York Timesbestselling author of Fates and Furies, The Monsters of Templeton, and Arcadia

In the waning days of 1999, the last of the Alters—three damaged but wisecracking sisters who share an apartment on Manhattan’s Upper West Side—decide it’s time to close the circle of the family curse by taking their own lives. But first, Lady, Vee, and Delph must explain the origins of that curse and how it has manifested throughout the preceding generations. Unspooling threads of history, personal memory, and family lore, they weave a mesmerizing account that stretches back a century to their great-grandfather, a brilliant scientist whose professional triumph became the terrible legacy that defines them. A suicide note crafted by three bright, funny women, A Reunion of Ghosts is the final chapter of a saga lifetimes in the making—one that is inexorably intertwined with the story of the twentieth century itself.

“Mitchell explores the mixed-blessing bonds of family with wry wit. This original tale is black comedy at its best.”—People Book of the Week


Praise For A Reunion of Ghosts: A Novel…

“This is a triumphant, beautiful, and devastating novel about coincidences, family, and the sins of our fathers.” — Anthony Doerr, New York Times bestselling author of All The Light We Cannot See

“Judith Claire Mitchell understands what’s at the marrow of our funny bones: that humor lives in darkness, that our families are our curses and our blessings, that great pain can beget great warmth and love.” — Lauren Groff, New York Times bestselling author of The Monsters of Templeton and Arcadia

“A rich portrait of a complicated family, at turns violent and hilarious, shot through with love and death and the scars that reappear generation after generation.” — Emma Straub, New York Times bestselling author of The Vacationers

“Mitchell explores the mixed-blessing bonds of family with wry wit. This original tale is black comedy at its best.” — People Book of the Week

“A Reunion of Ghosts is a darkly comic, multigenerational meditation on a family curse.… [It] balances gallows humor with the seriousness of the sisters’ history and is a memorable and meticulous exploration of personal responsibility and borrowed guilt.” — Los Angeles Times

“Judith Claire Mitchell’s splendidly dark and comic novel A Reunion of Ghosts. . . is a very funny book but it is also tender, sombre and thought-provoking.” — Financial Times

“Mitchell’s plot, which twists in unexpected but believable ways and opens up just when it seems as if it can only close in, is thoroughly satisfying, but it’s the tone of her novel—that ability to savor joy and sorrow at the same time—that makes it remarkable.” — Columbus Dispatch

“The novel is written like a long, group suicide note filled with personal and family revelations—brutally funny ones.” — New York Post

“Mitchell’s triumphant second novel explores love, identity, and the burdens of history in coruscating, darkly comic prose…. Moving nimbly through time and balancing her weightier themes with the sharply funny, fiercely unsentimental perspectives of her three protagonists… [it] is poignant and pulsing with life force.” — Publishers Weekly (starred review)

“Mitchell’s masterful family saga…captures the agony and ecstasy (but mostly agony) with deep empathy and profound wit. For the Alters, life has been a seemingly endless series of tragedies; for us, the tragedy is that this stunning novel inevitably comes to an end.” — Kirkus Reviews (starred review)

“Dark but comedic.… The wit of the three sisters alone will inspire you as much as the warming weather outside.” — Buzzfeed, “16 Awesome New Books To Read This Spring”

“My favourite novel of the year so far…. A literary mash-up of The Virgin Suicides and Grey Gardens. I wouldn’t be surprised if Wes Anderson and Sofia Coppola are slugging it out for the film rights already.” — Sam Baker, Harper's Bazaar online (UK)

“For the Alter sisters, living with the guilt of the generations, there is only one way out…. This novel is a carefully crafted, thought-provoking examination of history past and present as seen through the eyes of a complex yet humble family.” — Booklist

Judith Claire Mitchell, author of the novel The Last Day of the War, is an English professor at the University of Wisconsin–Madison. A graduate of the Iowa Writers’ Workshop, Mitchell has received fellowships from the James A. Michener/Copernicus Society, Wisconsin Institute for Creative Writing, Wisconsin Arts Board, and elsewhere. She lives in Madison, Wisconsin.