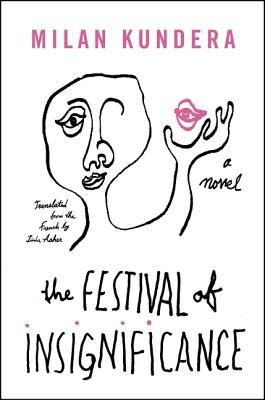 The Festival of Insignificance

From the internationally acclaimed, bestselling author of The Unbearable Lightness of Being, an unexpected and enchanting novel—the culmination of his life's work.

Casting light on the most serious of problems and at the same time saying not one serious sentence; being fascinated by the reality of the contemporary world and at the same time completely avoiding realism—that’s The Festival of Insignificance. Readers who know Milan Kundera’s earlier books know that the wish to incorporate an element of the “unserious” in a novel is not at all unexpected of him. In Immortality, Goethe and Hemingway stroll through several chapters together talking and laughing. And in Slowness, Vera, the author’s wife, says to her husband: “you’ve often told me you meant to write a book one day that would have not a single serious word in it…I warn you: watch out. Your enemies are lying in wait.”

Now, far from watching out, Kundera is finally and fully realizing his old aesthetic dream in this novel that we could easily view as a summation of his whole work. A strange sort of summation. Strange sort of epilogue. Strange sort of laughter, inspired by our time, which is comical because it has lost all sense of humor. What more can we say? Nothing. Just read.


Praise For The Festival of Insignificance: A Novel…

“There is a timeless quality to his philosophy about the importance of laughter…Kundera is still the powerful and incisive writer he always was.”
— New York Times Book Review

“Compelling…That Kundera has his tongue half in his cheek is part of the charm… offers both a continuation of Kundera’s signature investigations and a reaction to the toxicity of the present day.”
— Los Angeles Times

“Kundera doesn’t present himself as a priest of the novel who, having been inducted into its higher mysteries, now deigns to share his brilliance with mere mortals. He is simply one character among others in the novel, curious, perplexed, and amused by the spectacle of human nature.”
— New Republic

“Kundera is a master at uniting disparate characters by tracing their intersecting journeys, and by allowing resonant words inside the head of one character to sing inside the thoughts of another.”
— The Atlantic

“An entertaining divertissement, a lightly comic fiction blending Gallic theorizing and Russian-style absurdity…This is, in short, just the book for an idle afternoon spent sipping espresso and watching the passing show on the Boulevard Saint-Michel or Connecticut Avenue.”
— Michael Dirda, Washington Post

“Stunningly profound…a late-career confection which, in its compact slimness, re-proves Kundera’s chops when it comes to overlapping narratives and beautifully expressing the junk and clutter of the modern world.”
— NPR Books

“Slender but weighty, thoroughly cerebral…It comes as a welcome corrective to so much American-style realist fiction, which in heavy doses can blur into a kind of sameness…what is moving about this novel is its embrace of what has always driven Kundera, the delicate state of living between being and nothingness. Far from rehashing this theme, it presses it into new form: shorter, tighter, fired by aging rather than by coming of age. It would be a poor fit for Hollywood, but it’s a perfect one for Kundera, and for anyone who has looked at life in hindsight.”
— Boston Globe

“This slight but wonderful novel offers its own distinct brand of pleasure… a fitting capstone on an extraordinary career.”
— Benjamin Herman, Slate

“[Kundera] stands in the West as the representative Eastern European author of the second half of the 20th century-and the most celebrated Czech writer since Kafka… a wily, playful, feather-light novella…It seems fitting that he should end his career not with a bang but a giggle.”
— Wall Street Journal

“This novel is a fitting bookend to Kundera’s long career intersecting the absurd and the moral.”
— Publishers Weekly

“Forgotten tyrants and blatant belly buttons have equally playful roles in this deceptively slight, whimsically thoughtful tale of a few men in Paris…This strangely amusing novella has the power to inspire serious efforts to find significance in the very book in which it is so perversely denied.”
— Kirkus Reviews (starred review)

“Stylistically and thematically, it’s classic Kundera: polyphonic, digressive, intellectual yet anti-philosophical, deliberately strange, and aggressively light. And his descriptions are as beautiful as ever.”
— Booklist

“His first novel in almost 15 years, Kundera takes us on a journey where the only thing that really matters to his four characters is the word ‘friendship’. Another beautiful work from Kundera, he casts light on serious issues while not saying anything serious at all.”
— The Reading Room

“Its lightness is heavy with the weight of previous Kundera books, so a Stalin reference blooms with additional meaning -- because it’s been set so strikingly against previous portrayals of communism.”
— Huffington Post

“Poignant, surreal, and funny…”
— The Millions

“Enjoyable…readers will be very pleased with this latest release from Kundera, which has all the wit and humour of his earlier Immortality, but adds to this a unique and careful attention to unknown characters’ lives.”
— Publish ArtsHub