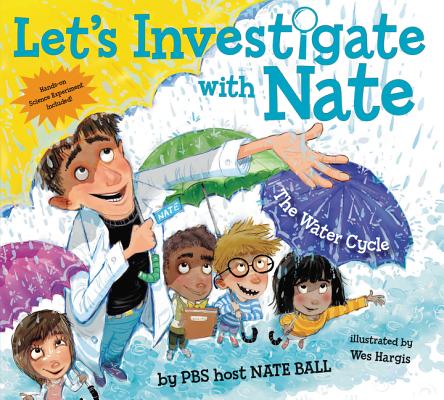 This is the first book in a new STEM-based picture book series from the Emmy Award-winning host of PBS’s Design Squad and Design Squad Nation, Nate Ball. With a lively cast of characters and vibrant illustrations by Wes Hargis, it's an adventure in learning! This nonfiction picture book is an excellent choice to share during homeschooling, in particular for children ages 4 to 6. It’s a fun way to learn to read and as a supplement for activity books for children.

Ever wonder where water comes from and where it goes? Or why sometimes it rains and sometimes it snows? Then join Nate Ball and his crack team of curious scientists as they shrink down smaller than a raindrop to see firsthand what the water cycle is all about.


Praise For Let's Investigate with Nate #1: The Water Cycle…

“Ms. Frizzle may be a long-standing staple, but this book makes for a good companion title to freshen up collections.”
— School Library Journal

“Ms. Frizzle and her magical bus have some competition . . . A solid start to a new science series.”
— Kirkus Reviews
or
Not Currently Available for Direct Purchase
Copyright © 2020 American Booksellers Association