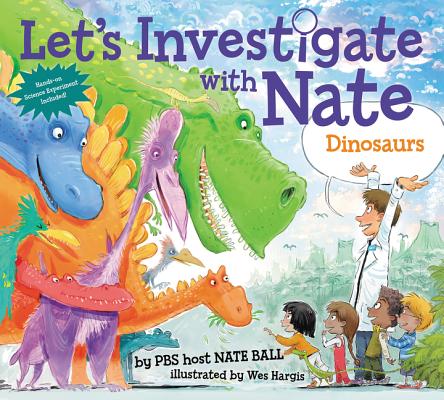 Bill Nye the Science Guy meets the Magic School Bus in this new STEM-based picture book series from the Emmy Award-winning host of PBS’s Design Squad and Design Squad Nation, Nate Ball. This nonfiction picture book is an excellent choice to share during homeschooling, in particular for children ages 4 to 6. It’s a fun way to learn to read and as a supplement for activity books for children.

Ever head to the museum and wish you could go back in time to see how big dinosaurs really were? Or think about what dinosaurs ate and where they lived? Follow Nate and his diverse team of intrepid scientists as they travel back across the millennia to dig up prehistoric fossils, travel across ancient landscapes, and discover what caused the dinosaur’s mass extinction.

Featuring vibrant illustrations by Wes Hargis and a lively and a lovable cast of characters, the Let’s Investigate with Nate books align to grade-appropriate state-level learning standards and curriculum.

With sidebars and charts and graphs and interactive elements—including a Do It Yourself experiment at the back of the book—Dinosaurs takes young readers on an adventure in learning and makes learning an adventure!