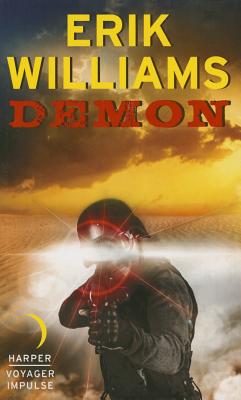 Mike Caldwell is a CIA assassin who thinks he's finally got a real case to work on. At a remote construction site in Iraq, something deadly and dangerous has been unearthed, and Mike believes he's dealing with a powerful pathogen that turns the infected into primal killing machines. The truth, however, is far worse.

The ancient prison of the fallen angel Semyaza has been uncovered, and for the first time in thousands of years he is free to roam the earth, possessing the bodies of the humans he hates. And everywhere he goes, Hell is sure to follow.

Now Mike is on Semyaza's trail, hunting a demon whose mere presence turns every living thing near it into a weapon of mass destruction. Both merchants of death are on a collision course, while the fate of humanity hangs in the balance.

“Demon is like a hellacious cross between 24, The Exorcist and a video game. Fast-paced and wicked fun.” — Jonathan Maberry, New York Times bestselling author

“Set amid the turmoil and terror of the present war, a much more ancient battle--the ultimate battle of GOOD versus EVIL - is resurrected...and God help us all.” — P.D. Cacek, author of The Wind Caller

“Demon is a swiftly-paced novel that kicks ass all over the place.” — Ray Garton, author of Serpent Girl

“Some books are like grenades with the pin pulled. ... That’s how I feel when I crack covers on an Erik Williams book. Handle this one with care... and watch out for flying shrapnel.” — Norman Partridge, author of Dark Harvest

Erik Williams is a former naval officer and current defense contractor (but he's not allowed to talk about it). He is also the author of Demon and numerous small press works and short stories. He currently lives in San Diego with his wife and three daughters. When he's not at his day job, he can usually be found changing diapers or coveting carbohydrates. At some point in his life, he was told by a few people he had potential. Recently, he told himself he's the bee's knees.