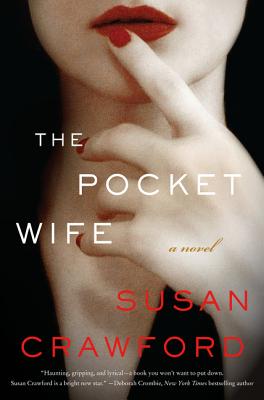 A stylish psychological thriller with the compelling intrigue of The Silent Wife and Turn of Mind and the white-knuckle pacing of Before I Go to Sleep—in which a woman suffering from bipolar disorder cannot remember if she murdered her friend.

Dana Catrell is shocked when her neighbor Celia is brutally murdered. To Dana’s horror, she was the last person to see Celia alive. Suffering from mania, the result of her bipolar disorder, she has troubling holes in her memory, including what happened on the afternoon of Celia’s death.

Her husband’s odd behavior and the probing of Detective Jack Moss create further complications as she searches for answers. The closer she comes to piecing together the shards of her broken memory, the more Dana falls apart. Is there a murderer lurking inside her . . . or is there one out there in the shadows of reality, waiting to strike again?

A story of marriage, murder, and madness, The Pocket Wife explores the world through the foggy lens of a woman on the edge.


Praise For The Pocket Wife: A Novel…

“Not a word is wasted in Susan Crawford’s fast-paced, thrilling debut. As Crawford explores the boundaries of memory and sanity, the suspense steadily gathers, and in her skilled hands, readers will be left guessing until the very end.”
— Lori Roy, Edgar Award winning author of BENT ROAD and LET ME DIE IN HIS FOOTSTEPS

“The Pocket Wife is an exceptional literary thriller debut that sensitively portrays a woman struggling with Bipolar Disorder, and the horrific possibility that she’s a murderer. Engrossing, thrilling, and page turning all the way through, this is one you won’t want to miss!”
— Chevy Stevens, New York Times bestselling author

“Because the tale is told primarily from Dana’s sharp but manic perspective, suspense develops around her possibly unreliable interpretation of events. This is a gripping, character-driven mystery that would pair well with Sophie Hannah’s The Truth-Teller’s Lie.”
— Booklist

“This intriguing thriller will leave readers guessing till the last minute. Dana Cantrell is a dynamic, well-written character whose bipolar disorder makes her both maddening and endearing. Tightly moving, fast-paced and suspenseful, Crawford’s debut novel puts her on the map of writers to watch.”
— RT Book Reviews (4 1/2 STARS)

“Descriptive, lyrical prose creates an intimate and visceral read that is both a solid mystery and a fast-paced psychological thriller. Try this first novel as a read-alike for Alice LaPlante’s Turn of Mind.”
— Library Journal

“Great premise, and characters, and a wonderfully evocative setting, heavy with heat and suburban boredom, and the uneasy threat of not quite knowing what is going on. Really great.”
— Sabine Durrant, author of Under Your Skin

Susan Crawford grew up in Miami, Florida, and graduated from the University of Miami with a BA in English and a minor in psychology. She later moved to New York City and then Boston before settling in Atlanta to raise three daughters and work in the field of adult education. A member of the Atlanta Writers Club and the Village Writers, Susan teaches at Georgia Piedmont Technical College and dabbles in local politics. She lives with her husband and a trio of rescue cats in Atlanta, where she enjoys reading books, writing books, rainy days, and spending time with the people she loves.