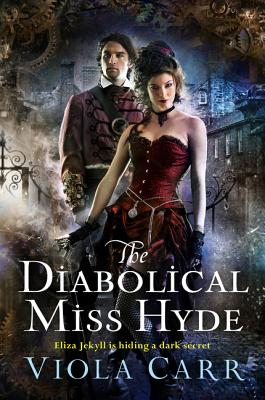 Forensic science, magic, mystery, and romance mix in this edgy steampunk fantasy—a retelling of the horror classic, in which Dr. Eliza Jekyll, daughter of the infamous Dr. Henry Jekyll—pursues a dangerous murderer in an alternate Victorian London.

In an electrified Victorian London, Dr. Eliza Jekyll is a crime scene investigator, hunting killers with newfangled technological gadgets. She will need every advantage available to catch a terrifying new psychopath splattering London with blood. Hidden in the grimy shadows, the fiendish murderer preys on beautiful women, drugging them before slicing off their limbs. Finding the “Slicer” can make Eliza’s career . . . or unmask her darkest secret. Like her father, she has a hidden second self that emerges when she drinks his forbidden magical elixir. Just a few sips, and a seductive and impulsive Lizzie Hyde is unleashed.

The members of the Royal Society do not trust Eliza, and they send their enforcer, the mercurial Captain Lafayette, to prove she’s a dangerous sorceress. The careful doctor knows that one wrong step can make her prey to the clever Lafayette, a man who harbors an evil curse of his own. No matter how much she craves the elixir, she must resist.

But as the Slicer case draws her into London’s luminous magical underworld, Eliza will need the potion’s power to help her . . . even if it might attract the attentions of Lafayette. .

Even if it means setting the wild Lizzie free. . . .


Praise For The Diabolical Miss Hyde: An Electric Empire Novel…

“This debut steampunk, gender-swapped take on Robert Louis Stevenson’s classic story of the uncontrolled id ... [has] energy and over-the-top adventure. Don’t think about it too hard, just enjoy the ride.”
— Library Journal

“...Ms. Carr takes us into an almost-familiar world, drawing us further into the dark just a bit at a time. If you thought steampunk was played out, here is an utterly convincing revivification.”
— Wall Street Journal

“This debut electropunk monster mashup gives you exactly what you never knew you wanted: The classic story of Dr. Jekyll and Mr. Hyde with a genderbent twist.”
— barnesandnoble.com

“I was utterly hooked and happily stayed that way for the next four-hundred-some pages. ...It’s dark, intense, and sometimes disturbing, and man is it awesome.”
— Beth Cato, author of The Clockwork Dagger

“The Diabolical Miss Hyde is a big, juicy steampunk/fantasy/romance/mystery package of fun, and I highly recommend it. Grade: A.”
— Smart Bitches

“There’s plenty of twists and turns, with a dash of magic and a wink at the classic literature.”
— Parkersburg News & Sentinel