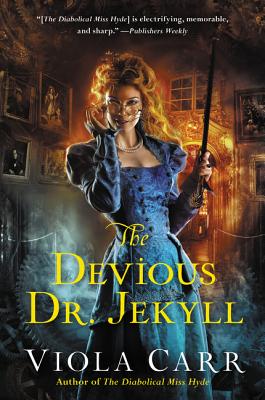 Dr. Eliza Jekyll, heroine of the electrifying The Diabolical Miss Hyde—an edgy steampunk retelling of the classic Dr. Jekyll and Mr. Hyde—investigates a bizarre murder case in an alternate Victorian London while battling her treacherous secret half: Lizzie Hyde.

Solving the infamous Chopper case has helped crime scene physician Dr. Eliza Jekyll establish her fledgling career in the chauvinistic world of Victorian law enforcement. But the scrutiny that comes with her newfound fame is unwelcome for a woman with a diabolical secret. And there is the mercurial Royal Society agent and wolf man Remy Lafayette. Does he want to marry her, eat her, or burn her at the stake? Though Eliza is uncertain about Remy, her dark and jealous shadow self, Lizzie, wants to steal the magnetic and persistent agent, and usurp Eliza’s life.

It’s impossible to push Remy away when he tempts her with the one thing she can’t resist: a bizarre crime. The search for a bloodthirsty ritual torturer dubbed the Pentacle Killer draws them into a terrifying world of spies, art thieves, and evil alchemy, where the price of immortality is madness—or damnation—and only Lizzie’s dark ingenuity can help Eliza survive.

As Eliza and Remy race to thwart a foul conspiracy involving the sorcerous French, they must also overcome a sinister enemy who is all too close: the vengeful Lizzie, determined to dispose of Eliza for good.

“The mix of figures from history...and fictional characters...plus the dual narration from both Eliza and Lizzie make this a standout.”
— Library Journal

“This debut steampunk, gender-swapped take on Robert Louis Stevenson’s classic story of the uncontrolled id ... [has] energy and over-the-top adventure. Don’t think about it too hard, just enjoy the ride.”
— Library Journal

“This debut electropunk monster mashup gives you exactly what you never knew you wanted: The classic story of Dr. Jekyll and Mr. Hyde with a genderbent twist.”
— barnesandnoble.com

“...Ms. Carr takes us into an almost-familiar world, drawing us further into the dark just a bit at a time. If you thought steampunk was played out, here is an utterly convincing revivification.”
— Wall Street Journal