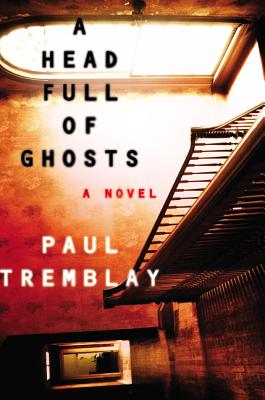 A Head Full of Ghosts

“This is the kind of scary novel that has more in mind than just the scares. When a family believes their eldest daughter is possessed, they allow a reality TV show to air a program detailing their trauma. But is Marjorie actually possessed? Could she be seeking attention or actually developing schizophrenia? As seen through the eyes of her eight-year-old sister, the answers aren't always easy, even when the younger sister is an adult looking back on her experience of watching her older sibling fall apart, and she tries to make sense of what happened through the tropes of horror films and gothic literature. A spooky story, but with a tragic, heart-felt difference.”
— Bill Carl (E), The Booksellers on Fountain Square, Cincinnati, OH
View the List

A chilling thriller that brilliantly blends psychological suspense and supernatural horror, reminiscent of Stephen King's The Shining, Shirley Jackson's The Haunting of Hill House, and William Peter Blatty's The Exorcist.

The lives of the Barretts, a normal suburban New England family, are torn apart when fourteen-year-old Marjorie begins to display signs of acute schizophrenia.

To her parents’ despair, the doctors are unable to stop Marjorie’s descent into madness. As their stable home devolves into a house of horrors, they reluctantly turn to a local Catholic priest for help. Father Wanderly suggests an exorcism; he believes the vulnerable teenager is the victim of demonic possession. He also contacts a production company that is eager to document the Barretts’ plight. With John, Marjorie’s father, out of work for more than a year and the medical bills looming, the family agrees to be filmed, and soon find themselves the unwitting stars of The Possession, a hit reality television show. When events in the Barrett household explode in tragedy, the show and the shocking incidents it captures become the stuff of urban legend.

Fifteen years later, a bestselling writer interviews Marjorie’s younger sister, Merry. As she recalls those long ago events that took place when she was just eight years old, long-buried secrets and painful memories that clash with what was broadcast on television begin to surface—and a mind-bending tale of psychological horror is unleashed, raising vexing questions about memory and reality, science and religion, and the very nature of evil.


Praise For A Head Full of Ghosts: A Novel…

“A Head Full of Ghosts scared the living hell out of me, and I’m pretty hard to scare.”
— Stephen King

“A Head Full of Ghosts is the literary lovechild of Shirley Jackson and William Peter Blatty, a novel that’s as disturbing as the worst nightmare you ever had as a kid, and as impossible to forget.”
— Elizabeth Hand, author of Generation Loss and Available Dark

“Tremblay paints a believable portrait of a family in extremis emotionally as it attempts to cope with the unthinkable ...Whether psychological or supernatural, this is a work of deviously subtle horror.”
— Publishers Weekly (starred review)