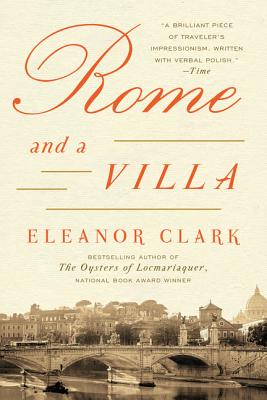 Rome and a Villa

“These essays gather up Rome and hold it before us, bristling and dense and dreamlike, with every scene drenched in the sound of fountains, of leaping and falling water.”  — The New Yorker

“Perhaps the finest book ever to be written about a city.” — New York Times

Bringing to life the legendary city's beauty and magic in all its many facets, Eleanor Clark's masterful collection of vignettes, Rome and a Villa, has transported readers for generations.

In 1947 a young american woman named Eleanor Clark went to Rome on a Guggenheim fellowship to write a novel. But instead of a novel, Clark created a series of sketches of Roman life written mostly between 1948 and 1951. Wandering the streets of this legendary city, Eleanor fell under Rome's spell—its pace of life, the wry outlook of its men and women, its magnificent history and breathtaking contribution to world culture. Rome is life itself—a sensuous, hectic, chaotic, and utterly fascinating blend of the comic and the tragic. Clark highlights Roman art and architecture, including Hadrian's Villa—an enormous, unfinished palace—as a prism to view the city and its history, and offers a lovely portrait of the Cimitero acattolico—long known as the Protestant cemetery—where Keats, Shelley, and other foreign notables rest.


Praise For Rome and a Villa…

“These essays gather up Rome and hold it before us, bristling and dense and dreamlike, with every scene drenched in the sound of fountains, of leaping and falling water.”
— The New Yorker

“Perhaps the finest book ever to be written about a city.”
— New York Times

“With her genius for attention, observation, and recording, she sees with beautiful accuracy he differences between things. With a true sense of love for the grand, the tragic, the beautiful, she has that necessary sense of their opposites. . . . This whole book is the distillation of a deep personal experience; it is autobiography in the truest sense. . . the story of the search for what is truly one’s own, and the ability to recognize ti when found, and to be faithful in love of it.”
— Katherine Anne Porter, Pulitzer-Prize winning author

“Witty without being flippant, unhurried without being slow, informative without being pedantic, contemplative and poetic without heaviness or affectation, Eleanor Clark’s book about Rome is, of course, a book about human destiny. To be as good as it is, it could not simply be about the buildings of Rome."
— New York Herald Tribune

“Like Rome itself, Rome and a Villa is sensual, demanding attention, patience, and pause. Reading the book is a meditative experience in which the present moment disappears as time collapses into the past and the buildings, fountains, and entire mass of Rome’s history lift up before you with their imposing and—Clark was right—terrifying grandeur. . . . The only thing to do in the face of this overwhelming emotional onslaught is to give in to it, as Clark did.”
— New Criterion

Eleanor Clark (July 6, 1913–February 16, 1996) was born in Los Angeles and attended Vassar College in the 1930s. She was the author of the National Book Award winner The Oysters of Locmariaquer, Rome and a Villa, Eyes, Etc., and the novels The Bitter Box, Baldur's Gate, and Camping Out. She was married to Robert Penn Warren.