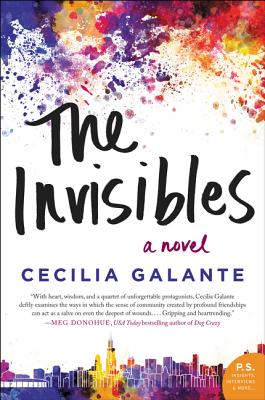 In the vein of Meg Donohue and Jennifer Close, comes Cecilia Galante’s adult debut about the complicated and powerful bonds of female friendship—a compelling, moving novel that is told in both the present and the past.

Thrown together by chance as teenagers at Turning Winds Home for Girls, Nora, Ozzie, Monica, and Grace quickly bond over their troubled pasts and form their own family which they dub The Invisibles. But when tragedy strikes after graduation, Nora is left to deal with the horrifying aftermath alone as the other three girls leave home and don’t look back.

Fourteen years later, Nora is living a quiet, single life working in the local library. She is content to focus on her collection of “first lines” (her favorite opening lines from novels) and her dog, Alice Walker, when out-of-the-blue Ozzie calls her on her thirty-second birthday. But after all these years, Ozzie hasn’t called her to wish a happy birthday. Instead, she tells Nora that Grace attempted suicide and is pleading for The Invisibles to convene again. Nora is torn: she is thrilled at the thought of being in touch with her friends, and yet she is hesitant at seeing these women after such a long and silent period of time. Bolstered by her friends at the library, Nora joins The Invisibles in Chicago for a reunion that sets off an extraordinary chain of events that will change each of their lives forever.

The Invisibles is an unforgettable novel that asks the questions: How much of our pasts define our present selves? And what does it take to let go of some of our most painful wounds and move on?


Praise For The Invisibles: A Novel…

“With heart, wisdom, and a quartet of unforgettable protagonists, Cecilia Galante deftly examines the ways in which the sense of community created by profound friendships can act as a salve on even the deepest of wounds....Gripping and heartrending.” — Meg Donohue, USA Today bestselling author of ALL THE SUMMER GIRLS and DOG CRAZY

“In The Invisibles, Cecilia Galante artfully reminds us that even the most carefully constructed facade doesn’t stand a chance against the healing power of true friendship.” — --Zoe Fishman, author of Balancing Acts

“Cecilia Galante tells a difficult story with sensitivity and grace...Fraught with pain but quietly hopeful, The Invisibles is a moving tribute to the strength of female friendship.” — Shelf Awareness, starred review

Cecilia Galante, who received an M.F.A. in Creative Writing from Goddard College, Vermont, is the author of eightyoung adult novels and a children’s chapter-book series. She has been the recipient of many awards, including an NAIBA Best Book of the Year, and an Oprah’s Teen Read Selection for her first novel, The Patron Saint of Butterflies. She lives in Kingston, Pennsylvania with her three children.

The book opens with Nora’s birthday, which she had forgotten. What is the significance

of Nora forgetting her own birthday?

One of the first lines that Nora quotes is: “Once upon a time, there was a woman who

discovered she had turned into the wrong person.” Do you think Nora has turned into

“the wrong person”? How does she let this feeling of leading a misguided life affect her?

“Leave it in the past, Ozzie had said, where it would get smaller and smaller until one

day it would just disappear altogether.” How has this pact changed Nora’s life, given

what we know? What do think Ozzie was referring to when she said this?

her life? Why does she continue to resist opening up to them about her past and her

As an adult, Nora still clings to her love of the moon and first lines of books. What does

this signify about her development into adulthood? Why do you think she still looks to the

The girls decided on the name “The Invisibles” for their group. In what ways do you think

each of them felt invisible in their lives as teenagers? What about now as adults?

The novel moves between the past and present. What does this structure reveal about

the characters? How does it affect your interpretations of them both then and now?

turned down most offers to go on dates after those relationships ended. She also has

few friends. Why do you think she’s so hesitant to let new people into her life?

school to the woman she is now? How do you think reuniting with her old friends will

We find out that Nora’s mother had tried to contact her after Daddy Ray died. Why do

you think Nora never wanted to confront her mother?

In what ways is Ozzie’s determination to find the rabbit’s mother significant? How about

Nora refusal to give the baby rabbit up, despite numerous demands from Ozzie to do

so? What might the baby rabbit represent to her?

Why do you think Nora shows such resistance to going back to Turning Winds? What

makes her different from the other women, who are eager to go back?

In what ways are the girls still the same people they were as teenagers? In what ways

are they different? Do you think they’ve changed for the better?