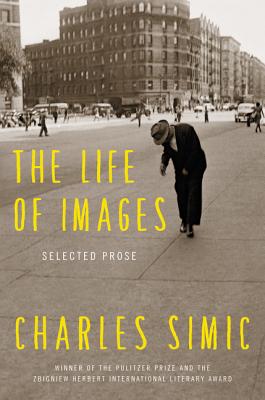 The Life of Images

A collection of new and selected essays by the Pulitzer Prize–winner and former Poet Laureate.

In addition to being one of America’s most famous and commended poets, Charles Simic is a prolific and talented essayist. The Life of Images brings together his best prose work written over twenty-five years.

A blend of the straightforward, the wry, and the hopeful, the essays in The Life of Images explore subjects ranging from literary criticism to philosophy, photography to Simic’s childhood in a war-torn country. Culled from five collections, each work demonstrates the qualities that make Simic’s poetry so brilliant yet accessible.

Whether he is revealing the influence of literature on his childhood development, pondering the relationship between food and comfort, or elegizing the pull to return to a homeland that no longer exists, the legendary poet shares his distinctive take on the world and offers an intimate look into his remarkable mind.


Praise For The Life of Images: Selected Prose…

“Intriguing. . . . Virtually all the essays include sentences that could well find a home in Bartlett’s. . . . Lucid, lyrical, educative and engaging virtually all areas of the brain.”
— Kirkus Reviews (starred review)

“Simic’s The Life of Images: Selected Prose, also published this month, elucidates the poems, providing background into his experience (including his childhood in war-torn Yugoslavia) and the influences that have shaped his thinking.”
— Washington Post

“’When our souls are happy,’ Charles Simic has written, ‘they talk about food.’ When my soul is happy, often enough, I want to talk about Mr. Simic...The Life of Images reminds us that Mr. Simic can be...intense (and as intensely charming) in his nonfiction.
— New York Times Book Review

“The Life of Images is a free-wheeling and stimulating volume...Wry and smart...Simic is piquantly engaging, shrewdly hilarious, and superbly discerning and moving in his elucidation of poetry’s invaluable unexpectedness, subversiveness, and inexhaustibility.”
— Booklist (starred review)

“In artful, lucid, and sometimes humorous essays, he offers commanding insights on such diverse topics as poetry’s relationship to philosophy, the ravages of war, and the unpredictable beauties of film and music...His wit shines and sparkles on every page.”
— Publishers Weekly

“Pulitzer Prize-winning poet Simic brings a nuanced, cosmopolitan perspective to his essays, which explore art, intellect, his childhood memories, and the immigrant experience in America.”
— O, the Oprah Magazine

“The Lunatic, his newest poetry collection, is his thirty-sixth. Simultaneously, Ecco, his publisher, has brought out The Life of Images: Selected Prose ,... the cream of his six previous prose collections... one of our finest poets,... a singularly engaging, eminently sane American essayist.”
— New York Review of Books

“Decades after immigrating to the States in 1954, he retains an outsider’s perspective: inquisitive, incredulous, amazed by the apparently ordinary-all excellent qualities for an essayist. There’s ample warmth and charm here.”
— New York Times Book Review