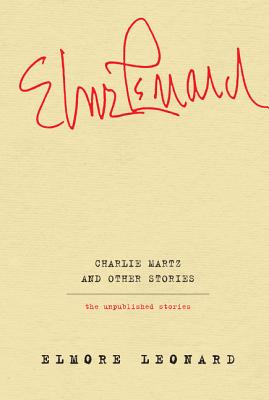 Charlie Martz and Other Stories

A collection of fifteen stories, eleven of which have never been previously published, from the early career of bestselling American master Elmore Leonard.

Over his long and illustrious career, Elmore Leonard was recognized as one of the greatest crime writers of all time, the author of dozens of bestselling books—many adapted for the big screen—as well as a master of short fiction. A superb stylist whose crisp, tight prose crackled with trademark wit and sharp dialogue, Leonard remains the standard for crime fiction and a literary model for writers of every genre.

Marked by his unmistakable grit and humor, the stories in Charlie Martz and Other Stories—produced early in his career, when he was making his name particularly with westerns—reveal a writer in transition, exploring new voices and locations, from the bars of small-town New Mexico and Michigan to a film set in Hollywood, a hotel in Southern Spain, even a military base in Kuala Lumpur. They also introduce us to classic Leonard characters, some who recur throughout the collection, such as aging lawman Charlie Martz and weary former matador Eladio Montoya.

Devoted Leonard aficionados and fans new to his fiction will marvel at these early works that reveal an artist on the cusp of greatness.


Praise For Charlie Martz and Other Stories: The Unpublished Stories…

“Why it’s hot: The great writer of Westerns and crime novels died in 2013, so this posthumous collection is a bonus.”
— USA Today

“Gunslingers and suits dreamed up well before Get Shorty and Out of Sight are sketches of the heroes and villains for whom Leonard would become known.”
— O, the Oprah Magazine

“Like Hemingway, Leonard excels in dramatizing the point at which apparently friendly mano a mano joshing threatens to erupt in violence. . . . Interesting [] for the signs and promises of the author’s future laconic command of dialogue and action and his knowing, lazy, wryly amused trademark voice.”
— Kirkus Reviews

“These very early stories of Elmore Leonard exhibit a real understanding of how to create interesting characters, structure settings that are believable, and tell stories that are compelling and realistic.”
— San Francisco Book Review

“The collection abounds with signs of the writer to come.”
— Newsday

“Here we see a master craftsman in his apprenticeship. . . . Already Leonard’s imagination is pulled between present and past, between Midwest, West, and abroad, interests that would define his career. . . . Die-hard fans will find this one difficult to resist.”
— Keir Graff, Booklist

“Quirky, tough, humorous, and always surprising characters. . . . There’s a reason Leonard has been labeled one of the best crime writers in America and why his clipped and witty dialog and economical writing style have found their way to television and film. He’s just a great storyteller.”
— Library Journal (starred review)

“This book is honest and it’s raw, and we can picture Leonard so vividly working. . . . A meaningful insight into the mind of a burgeoning writer who would one day become an international bestseller. . . . It’s fascinating and inspiring to be invited to have a peek.”
— New York Journal of Books

“Even [Leonard’s] breeziest efforts have a way of nailing our conflicted culture in all its stubborn glory and misfit dreams. “Charlie Martz and Other Stories” clues us into the dreams he was having when life in America was, at least on the surface, less turbulent.”
— Chicago Tribune

“[Leonard] writes characters like no one else. . . . Even before he mastered the [] gritty style he’s most known for, he was able to evoke subtle tones and achingly beautiful moods. . . . These are exceptional stories written by an artist at work and at play.”
— Shelf Awareness for Readers

“There’s much to welcome in this posthumous assortment by an author Stephen King hailed as, “the great American writer.” . . . This collection certainly serves up another batch of those gravelly, authentic, fringe-dwelling lives.”
— CriminalElement.com