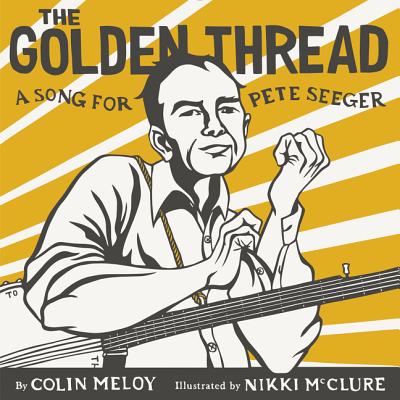 A Song for Pete Seeger

With dazzling, lyrical verse in the folk revival style and stunning cut-paper illustrations, Colin Meloy and Nikki McClure pay tribute to Pete Seeger, a visionary who changed the world with song.

Pete Seeger once sang that if he had a golden thread, he would use it to weave people from all over the world to one another. That golden thread, for Pete, was music.

Born into a family of traveling musicians, Pete picked up his first instrument at age seven. From then on, music was his life, whether he was playing banjo for soldiers during World War II, rallying civil rights activists and war protesters with songs such as “We Shall Overcome,” “Where Have All the Flowers Gone?,” and “If I Had a Hammer,” or leading environmental efforts to clean up the Hudson River.

For decades, Pete Seeger’s messages of universal understanding and social and environmental justice inspired generations—and have left a lasting legacy.

Nikki McClure is an artist and writer who lives with her family in Olympia, Washington. She is the author-illustrator of a number of acclaimed picture books, including Waiting for High Tide, In, Collect Raindrops, and The Great Chicken Escape, and she is the illustrator of All in a Day by Cynthia Rylant, May the Stars Drip Down by Jeremy Chatelain, and The Golden Thread by Colin Meloy.


Praise For The Golden Thread: A Song for Pete Seeger…

“Meloy’s ode to Pete Seeger celebrates his life as a performer, songwriter, union organizer, civil rights advocate, ship builder, sailor, carpenter, and environmentalist. This makes a good introduction to Seeger and his many contributions to American music.”
— Booklist

“In this unique picture book biography of the late folk musician and activist, the text is written as lyrics to a ballad. McClure’s artwork complements the subject with her signature style of impeccable and fluid cut paper. [A] thoughtful and exquisitely-illustrated tribute to Pete Seeger.”
— School Library Journal

Praise for THE WILDWOOD CHRONICLES: “Meloy’s debut is the kind of delicate, elaborate fantasy that is so well versed in classic Narnian tropes that it is destined to be enthusiastically embraced.”
— ALA Booklist *starred review*

Praise for THE WILDWOOD CHRONICLES: “Meloy’s storytelling skills, honed on his epic ballads for The Decemberists, translate well to prose. Ellis’s precise, detailed style evokes a folksy charm that is just right for the overgrown natural world of Wildwood and its inhabitants.”
— The Atlantic

Praise for THE WILDWOOD CHRONICLES: “This book is like the wild, strange forest it describes. It is full of suspense and danger and frightening things the world has never seen, and once I stepped inside I never wanted to leave.”
— Lemony Snicket

Praise for THE WILDWOOD CHRONICLES: “Dark and whimsical, with a true and uncanny sense of otherworldliness, Wildwood is the heir to a great tradition of stories of wild childhood adventure. It snatched me up and carried me off into a world I didn’t want to leave.”
— Michael Chabon

Praise for THE WILDWOOD CHRONICLES: “Wildwood is a beautiful object and a beautiful read. One part fairy tale, one part coming of age story, one part unrepentantly gorgeous work of art, this book is overflowing with gifts.”
— Jonathan Safran Foer
or
Buy Here
Copyright © 2020 American Booksellers Association