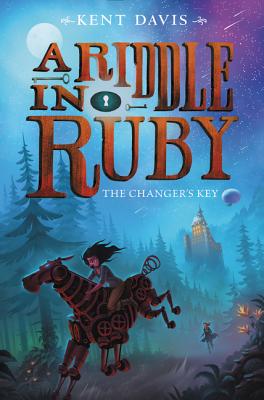 The Riddle in Ruby trilogy takes readers on a rip-roaring adventure through an alternate version of colonial America, where magic and science meet, and where one young thief carries a secret everyone wants. In this second volume, Ruby Teach has become the enemy’s prisoner. She bargained with her freedom to protect her friends—but her friends aren’t about to abandon her, either. That’s not what friends do.

Ruby’s blood holds a secret, one that could turn the tides of the looming war for whomever unlocks it first. Ruby’s father, former pirate Captain Teach, and her friends—a motley crew made up of a young aristocrat, a servant, and an apprentice alchemist—must race against time to locate the hidden fortress where she’s being held. But the one person who could help them is Ruby’s mysterious and powerful mother, and no one has seen her since Ruby’s birth.

Kent Davis sweeps our heroes through cities and the deepest wilderness with imagination, humor, and magic that fans of Jonathan Stroud and Terry Pratchett will devour.


Praise For A Riddle in Ruby #2: The Changer's Key…

“A combustive delight. Fans of Snicket-ian gloom will revel in the thrill. …Dastardly, heroic, and powerful roles are played by both sexes, but this tale is well-populated by members of the not-so-weaker sex who are ready to throw a punch. …Piracy, pyrotechnics, prison—prodigious.”
— Kirkus Reviews (starred review)

“This is a fast paced, story-driven novel that never feels like the second book in a trilogy. Ruby is a complex character rocked back and forth with her differing emotions. ...The novel ends on a cliffhanger ensuring fans will return for the final book of Ruby’s journey.”
— School Library Journal

“Davis stays true to form in this incendiary sequel. Adventure is on every page, from ship fires to spy training...Readers who loved the first book will dig into this one, and new converts will reach for both, eager for the coming third.”
— Booklist

“A Riddle In Ruby has everything you could possibly want from a story: clever heroes, fiendish villains, startling plot twists, pirates, thieves, swashbuckling, adventure, action, mayhem - and plenty of humor. This is an exceptionally enjoyable, incredibly original series.”-
— Stuart Gibbs, author of the New York Times-bestselling Spy School saga

Kent Davis is the author of A Riddle in Ruby. He is also an actor, a game designer, and a teacher. He lives in Bozeman, Montana, with his wife and a wily dog ninja named Bobo. www.kentishdavis.com