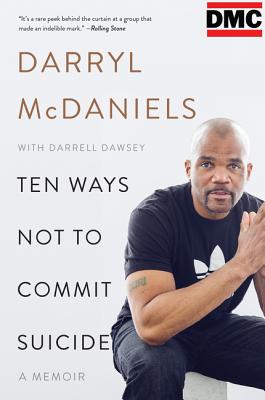 Ten Ways Not to Commit Suicide

In this surprising and moving memoir, the legendary rap star and cofounder of Run D.M.C. keeps it a hundred percent, speaking out about his battle with depression and overcoming suicidal thoughts—one of the most devastating yet little known health issues plaguing the black community today.

As one third of the legendary rap group Run D.M.C., Darryl “DMC” McDaniels—aka Legendary MC, The Devastating Mic Controller, and the King of Rock—had it all: talent, money, fame, prestige. While hitting #1 on the Billboard charts was exhilarating, the group’s success soon became overwhelming. A creative guy who enjoyed being at home alone or with his family, DMC turned to alcohol to numb himself, a retreat that became an addiction. For years, he went through the motions. But in 1997, when intoxication could no longer keep the pain at bay, he plunged into severe depression and became suicidal. He wasn’t alone. During the same period, suicide became the number three leading cause of death among black people—a health crisis that continues to this day.

In this riveting memoir, DMC speaks openly about his emotional and psychological struggles and the impact on his life, and addresses the many reasons that led him—and thousands of others—to consider suicide. Some of the factors include not being true to who you are, feelings of loneliness, isolation, and alienation, and a lack of understanding and support from friends and family when it’s needed most. He also provides essential information on resources for getting help. Revealing how even the most successful people can suffer from depression, DMC offers inspiration for everyone in pain—information and insight that he hopes can help save other lives.


Praise For Ten Ways Not to Commit Suicide: A Memoir…

“It’s a rare peek behind the curtain at a group that made an indelible mark, then faded away.” — Rolling Stone

“First, DMC transformed music with arch rhymes and hard, skyscraper-sized beats. Now, in Ten Ways Not to Commit Suicide, he promises to change the way we look at our lives and mental health with gentle, plainly-spoken language and an utter commitment to honesty. In both instances, his gift to us are his words: Often funny, sometimes bitter, typically sharp, always penetrating. But in Ten Ways Not to Commit Suicide, the driving rhythm we hear is the sound of his heart. A must-read.” — Harry Allen, Hip-Hop Activist & Media Assassin

“I have longed admired DMC. He, his group Run-DMC, are as much of my soul as my own blood relatives. They changed hip-hop, pop culture, young people worldwide-and they made poor kids like me believe in ourselves. But with this memoir DMC has done something far greater: he has stripped away the fame and success and money and legendary status and presents himself as human, raw, naked. Mental health, depression, suicide are not things many are comfortable discussing publicly or privately. But we can’t heal if we can’t talk. And talk DMC does, uncomfortably, transparently, about his own life, in a way that is not only salvation for him, but a model for us all to follow.” — Kevin Powell, author of The Education of Kevin Powell: A Boy's Journey into Manhood

“First, DMC transformed music with arch rhymes and hard, skyscraper-sized beats. Now, in Ten Ways Not to Commit Suicide, he promises to change the way we look at our lives and mental health with gentle, plainly-spoken language and an utter commitment to honesty. In both instances, his gift to us are his words: Often funny, sometimes bitter, typically sharp, always penetrating. But in Ten Ways Not to Commit Suicide, the driving rhythm we hear is the sound of his heart. A must-read.” — Publishers Weekly (starred review)

“His descent into alcoholism and depression are written with such candor that it feels as though one is reading his personal diary. DMC not only deftly and concisely explains the Run D.M.C. formation and breakup but also intersperses inspirational wisdom for others struggling with difficult life circumstances as well. This important read isn’t ‘just’ a memoir; it is also a self-help book that opens the door for conversations about mental health.” — Library Journal

“DMC’s must-read memoir ventures into uncharted territory for all musicians, period-not just hip-hop artists. His honesty about his feelings easily makes this book an achievement that ranks alongside his Hall of Fame rhymes.” — Chuck D, Public Enemy

“Darryl DMC McDaniels is a deeply-talented artist who has much to teach us. I applaud his courage and compassion in sharing his personal story. Ten Ways Not To Commit Suicide is an inspiring read for all audiences.” — Queen Latifah

Darryl DMC McDaniels is a musical icon and one of the founders—along with Joseph “Rev. Run” Simmons and the late, great Jason “Jam Master Jay” Mizell—of the groundbreaking rap group Run-DMC. With a fan base that rivals some of the biggest acts in rock and roll, Run-DMC has sold more than thirty million singles and albums worldwide and has helped transform hip-hop into one of the most popular musical genres of all time. In 2009, Run-DMC was inducted into the Rock and Roll Hall of Fame. In 2014, McDaniels launched the comic book company Darryl Makes Comics and published the graphic novel DMC. His work with the Felix Organization, a nonprofit he cofounded, led him to speak at the White House and to appear before Congress and various state legislatures on behalf of adoptees and foster children. When he’s not on tour speaking or performing, he lives in New York City.
Loading...
or support indie stores by buying on