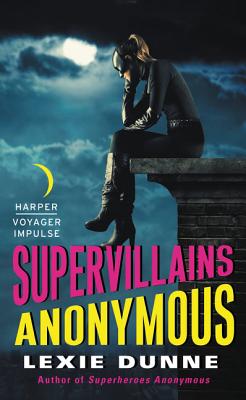 New superhero Gail Godwin, the one and only Hostage Girl, is in big trouble: her nemesis Chelsea is loose, her trainer Angélica is dead, and everybody thinks Gail did it. To make matters worse, Davenport Industries has thrown her into a prison that just happens to be full of the very same supervillains who used to kidnap her on an almost daily basis.

Outside, things aren't going all that great either. There's a conspiracy that runs all the way to the bedrock of the superhero community, and it's affecting everybody Gail loves. With her friends in the crosshairs, it's up to her to escape and get to the bottom of things. Subterfuge, crime-fighting, and running away from everybody you know should be a cinch, right?

Wrong. Gail faces off against hero and villain alike just to stay alive. And you know what they say about supervillains: if you can't beat them…join them.

Lexie Dunne is a woman of many masks, all of them stored neatly in a box under her bed. By day a mild-mannered technical writer and by night a novelist, she keeps life interesting by ignoring it completely and writing instead. She hails from St. Louis, home of the world's largest croquet piece, where she can be found reading comics and spoiling her dog. Supervillains Anonymous is her love letter to the caped evildoers of the world. She does not count herself among their company, no matter how many cliffhangers she writes.