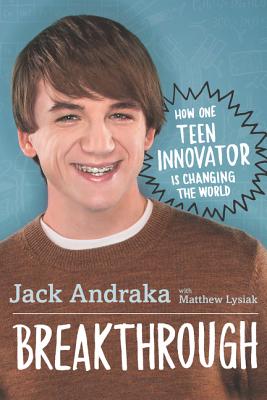 How One Teen Innovator Is Changing the World

Featured in the 2018 movie Science Fair!

In this acclaimed memoir, teen innovator and scientist Jack Andraka tells the story behind his revolutionary discovery.

When a dear family friend passed away from pancreatic cancer, Jack was inspired to create a better method of early detection. At the age of fifteen, he garnered international attention for his breakthrough: a four-cent strip of paper capable of detecting pancreatic, ovarian, and lung cancers four hundred times more effectively than the previous standard.

Jack's story is not just a story of dizzying international success; it's a story of overcoming depression and homophobic bullying and finding the resilience to persevere and come out.

His account inspires young people, who he argues are the most innovative, to fight for the right to be taken seriously and to pursue our own dreams. Do-it-yourself science experiments are included in each chapter, making Breakthrough perfect for STEM curriculum.

But above all, Jack's memoir empowers his generation with the knowledge that we can each change the world if we only have the courage to try.


Praise For Breakthrough: How One Teen Innovator Is Changing the World…

“[N]ot only interesting, but beautifully honest…Jack’s life unfurls with the…realities of growing up that, at times, conflict with identity and awareness, self- esteem, and self-worth [and] are openly shared with the reader. Andraka is certainly an inspiration beyond his generation.” — USA Today

Jack Andraka was just a fifteen-year-old Maryland high school student when he invented an inexpensive early-detection test for pancreatic, ovarian, and lung cancers. Now, at eighteen, he has already won the 2012 Intel ISEF Gordon E. Moore Award, the 2012 Smithsonian American Ingenuity Youth Achievement Award, first place in the 2014 Siemens We Can Change the World Challenge, and the 2014 Jefferson Award. He speaks to audiences across the globe about his personal story, his research, LGBT issues, and his ideas for STEM education reform. He has been featured in several documentaries, including Morgan Spurlock's You Don't Know Jack, as well as countless radio, newspaper, and magazine articles.

Matthew Lysiak is a nationally recognized journalist and a former reporter for the New York Daily News. He is also the author of Newtown: An American Tragedy and has appeared as a contributor on the Today show, MSNBC, Fox News, CNN, and countless other national and local media outlets to discuss his work.