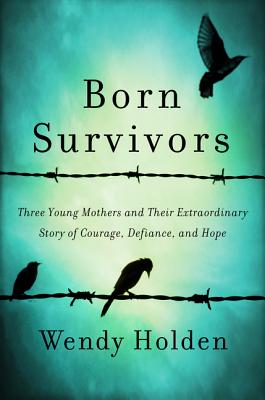 Three Young Mothers and Their Extraordinary Story of Courage, Defiance, and Hope

The Nazis murdered their husbands but concentration camp prisoners Priska, Rachel, and Anka would not let evil take their unborn children too—a remarkable true story that will appeal to readers of The Lost and The Nazi Officer’s Wife, Born Survivors celebrates three mothers who defied death to give their children life.

Eastern Europe, 1944: Three women believe they are pregnant, but are torn from their husbands before they can be certain. Rachel is sent to Auschwitz, unaware that her husband has been shot. Priska and her husband travel there together, but are immediately separated. Also at Auschwitz, Anka hopes in vain to be reunited with her husband. With the rest of their families gassed, these young wives are determined to hold on to all they have left—their lives, and those of their unborn babies. Having concealed their condition from infamous Nazi doctor Josef Mengele, they are forced to work and almost starved to death, living in daily fear of their pregnancies being detected by the SS.

In April 1945, as the Allies close in, Priska gives birth. She and her baby, along with Anka, Rachel, and the remaining inmates, are sent to Mauthausen concentration camp on a hellish seventeen-day train journey. Rachel gives birth on the train, and Anka at the camp gates. All believe they will die, but then a miracle occurs. The gas chamber runs out of Zyklon-B, and as the Allied troops near, the SS flee. Against all odds, the three mothers and their newborns survive their treacherous journey to freedom.

On the seventieth anniversary of Mauthausen’s liberation from the Nazis by American soldiers, renowned biographer Wendy Holden recounts this extraordinary story of three children united by their mothers’ unbelievable—yet ultimately successful—fight for survival.


Praise For Born Survivors: Three Young Mothers and Their Extraordinary Story of Courage, Defiance, and Hope…

“Packed with harrowing detail and impressively well-researched…. Intense, powerful, and moving, more than make up for this. Born Survivors is a worthy testament to these three women and the miraculous survival of their children.”
— Jewish Chronicle

“A work of quite extraordinary investigative dedication…. A moving testament of faith.”
— Sir Harold Evans

“An astonishing and deeply moving work.… With remarkable detail gleaned from a wealth of research.”
— Booklist (starred review)

“Even though it occurred more than 70 years ago, the story’s truth is so chillingly portrayed that it seems as if it could have happened recently.... An engrossing, intense, and highly descriptive narrative chronicling the ghastly conditions three pregnant women suffered through at the hands of the Nazis.”
— Kirkus Reviews

“Holden’s triple biography is packed with enough contextual information to qualify as a history lesson but makes its impression as a tale of undeniable courage and astonishing love in the face of incredible cruelty and evil.”
— Contra Costa Times

“Holden weaves…written, oral and recorded accounts, plus an array of historical records, into a spellbinding story of perseverance amid systematic abuse.”
— American Jewish World

Wendy Holden was a journalist for eighteen years, including a decade at the Daily Telegraph. She is the author and coauthor of more than thirty books, among them several internationally acclaimed wartime biographies, plus the New York Times bestsellers A Lotus Grows in the Mud (with Goldie Hawn) and Lady Blue Eyes (with Frank Sinatra's widow, Barbara). She lives in Suffolk, England, with her husband and two dogs, and divides her time between the UK and the US.