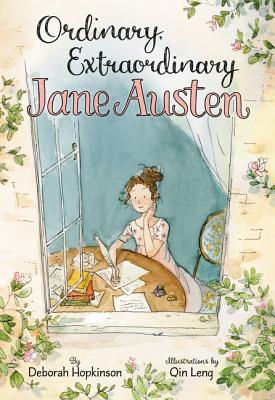 “A charming account of pride and persistence.” — Publishers Weekly

“This is an up-close introduction to Austen…[and] a story of a girl’s empowerment.” — Booklist

“Hopkinson’s light, conversational tone and obvious appreciation for her subject combine with Qin’s lively ink-and-watercolor illustrations to create an engaging portrait of this talented writer. A perfectly pitched celebration of an esteemed author.” — Kirkus Reviews

A lively take on a woman who, despite publishing conventions that favored male writers, refused to let her authorial voice remain mute. This manages to successfully introduce Austen’s characteristic wit and social commentary to an audience who would otherwise be too young to digest the original works. A delightful read. — Bulletin of the Center for Children’s Books