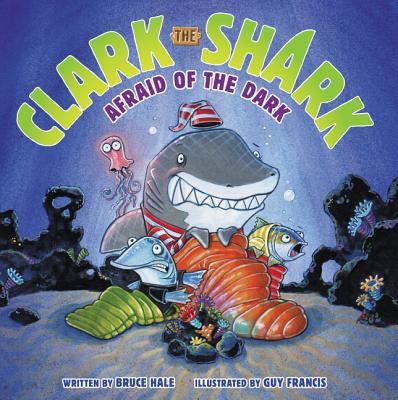 Afraid of the Dark

Clark the Shark is ready for his first big sleepover! He’s nervous about sleeping outside without his glow-fish night-light, but he doesn’t want anyone to know he’s just a teeny-tiny bit afraid of the dark. So Clark makes up a rhyme to help him stay cool: “Take heart, be smart, sharks aren’t afraid of the dark.”

But when the sun sets and his friends begin telling spooky stories, Clark’s voice sounds quiet and small and not brave at all. In this empowering tale about conquering nighttime fears, Clark the Shark learns how friendship can help light the way through the dark.


Praise For Clark the Shark: Afraid of the Dark…

“Most especially, enthusiastic kids will appreciate the message that there is a time and a place for everything-they needn’t stay cool ‘round the clock.”
— Kirkus Reviews

Bruce Hale has written and/or illustrated over sixty books for kids and is the author of Clark the Shark; Clark the Shark Dares to Share; the award-winning Chet Gecko Mysteries series; Snoring Beauty, one of Oprah’s Recommended Reads for Kids; and the School for S.P.I.E.S. series. In his free time, Bruce enjoys hiking, watching movies, and making music. He lives in Santa Barbara, California, with his wife, dog, and many hats. You can catch him online at www.brucehale.com.

Guy Francis spends most of his time drawing, painting, and drawing some more. He has done a variety of illustration work in the children’s market, including editorial and educational illustration, chapter books, and picture books. He freelances from his home in Provo, Utah, where his wife and four children are his own personal art critics and bring a healthy bit of chaos to the studio. Every now and then he gets out of the house and heads to the mountains with his family. You can visit him online at www.guyfrancis.com.