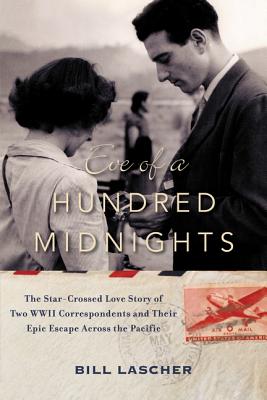 Eve of a Hundred Midnights

The unforgettable true story of two married journalists on an island-hopping run for their lives across the Pacific after the Fall of Manila during World War II—a saga of love, adventure, and danger.

On New Year’s Eve, 1941, just three weeks after the attack on Pearl Harbor, the Japanese were bombing the Philippine capital of Manila, where journalists Mel and Annalee Jacoby had married just a month earlier. The couple had worked in China as members of a tight community of foreign correspondents with close ties to Chinese leaders; if captured by invading Japanese troops, they were certain to be executed. Racing to the docks just before midnight, they barely escaped on a freighter—the beginning of a tumultuous journey that would take them from one island outpost to another. While keeping ahead of the approaching Japanese, Mel and Annalee covered the harrowing war in the Pacific Theater—two of only a handful of valiant and dedicated journalists reporting from the region.

Supported by deep historical research, extensive interviews, and the Jacobys’ personal letters, Bill Lascher recreates the Jacobys’ thrilling odyssey and their love affair with the Far East and one another. Bringing to light their compelling personal stories and their professional life together, Eve of a Hundred Midnights is a tale of an unquenchable thirst for adventure, of daring reportage at great personal risk, and of an enduring romance that blossomed in the shadow of war.


Praise For Eve of a Hundred Midnights: The Star-Crossed Love Story of Two WWII Correspondents and Their Epic Escape Across the Pacific…

“An affectionate look at the adventures of a World War II correspondent. ... [A] vivid portrait.”
— Minneapolis Star Tribune

“Propulsive. ... [A] remarkable book, which is part history, part a celebration of war correspondence, but, mostly, a love story. ... Lascher conveys the privation, danger, and romance of this time in an utterly detailed and beguiling way.”
— Booklist (starred review)

“A gripping, well told, and accurate reconstruction of a very dramatic and romantic time in the life stories of two young journalists caught in the upheavals of World War II Asia. A story of high adventure.”
— Stephen R. MacKinnon, author of China Reporting: An Oral History of American Journalism in the 1930s and 1940s

“I am deeply moved by the story of Mel and Annalee Jacoby. Bill Lascher provides a rich account of life in Chungking, where young Jacoby cut his teeth as a Time correspondent, before taking us into the whirlwind of MacArthur’s retreat to Corregidor. It’s a breathtaking story all the way.”
— Peter Rand, author of China Hands

“The unforgettable story of Bill Lascher’s cousin, a man he meets through his own reporting to uncover a piece of family history that also belongs in the archives of America’s great war correspondents. This is every bit a book about what drives reporters to the frontlines.”
— Jackie Spinner, author of Tell Them I Didn't Cry

Bill Lascher is a journalist whose work has appeared in the Guardian, Pacific Standard, Atlas Obscura, Gizmodo, Portland Monthly, and elsewhere. He was a 2011 Knight Digital Media Center multimedia and convergence fellow at the University of California, Berkeley, Graduate School of Journalism. Lascher is a graduate of Oberlin College, the Annenberg School for Communication at USC, and the Salt Institute for Documentary Studies. He lives in Portland, Oregon.