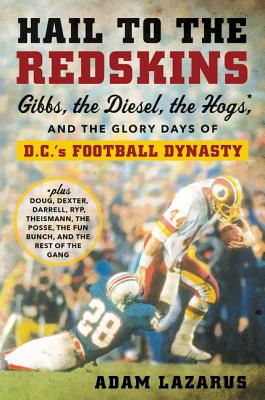 Hail to the Redskins

Gibbs, the Diesel, the Hogs, and the Glory Days of D.C.'s Football Dynasty

At last, the definitive account of the Redskins’ championship decade. A must-read for any fan, Adam Lazarus interviews key inside sources to vividly re-create the plays, the players, the fans, and the opponents that shaped this unforgettable football dynasty.

Based on more than ninety original interviews, here is the rollicking chronicle of the famed Washington Redskins teams of the Joe Gibbs years—one of the most remarkable and unique runs in NFL history. From 1981 to 1992, Gibbs coached the franchise to three Super Bowl victories, making the team the toast of the nation’s capital, from the political elite to the inner city, and helping to define one of the sport’s legendary eras.

Veteran sportswriter Adam Lazarus masterfully charts the Redskins’ rise from mediocrity (the franchise had never won a Super Bowl and Gibbs’s first year as head coach started with a five-game losing streak that almost cost him his job) to its stretch of four championship games in ten years. What makes their sustained success all the more remarkable, in retrospect, is that unlike the storied championship wins of Joe Montana’s 49ers and Tom Brady’s Patriots, the Redskins’ Super Bowl victories each featured a different starting quarterback: Joe Theismann in 1983, the franchise’s surprising first championship run; Doug Williams in 1988, a win full of meaning for a majority African American city during a tumultuous era; and Mark Rypien in 1992, capping one of the greatest seasons of all time, one that stands as Gibbs’s masterpiece.

Hail to the Redskins features an epic roster of saints and sinners: hard-drinking fullback John Riggins; the dominant, blue-collar offensive linemen known as “the Hogs,” who became a cultural phenomenon; quarterbacks Williams, the first African American QB to win a Super Bowl, and Theisman, a model-handsome pitchman whose leg was brutally broken by Lawrence Taylor on Monday Night Football; gregarious defensive end Dexter Manley, who would be banned from the league for cocaine abuse; and others including the legendary speedster Darrell Green, record-breaking receiver Art Monk, rags-to-riches QB Rypien, expert general managers and talent evaluators Bobby Beathard and Charley Casserly, aristocratic owner Jack Kent Cooke, and, of course, Gibbs himself, a devout Christian who was also a ruthless competitor and one of the sport’s most adaptable and creative coaching minds.


Praise For Hail to the Redskins: Gibbs, the Diesel, the Hogs, and the Glory Days of D.C.'s Football Dynasty…

“If there is one book to own about those glorious days, when Washington ruled the NFL world, this is it. A great literary ride about a special team. A must have for fans of the team.” — Mike Freeman, Bleacher Report's NFL Lead Writer and author of Undefeated: Inside the Miami Dolphins' Perfect Season

“Lazarus’ solid, unflashy reporting is celebratory without being worshipful, and his study of what made a winning Washington team click will inspire both nostalgia and yearning among fans.” — Kirkus Reviews

“The wildly successful Joe Gibbs era comes alive in Adam Lazarus’s riveting new book about the most important sports team in Washington. Gibbs took a proud but struggling franchise and turned it into a football dynasty. What a delight it is to live that fascinating story all over again.” — Christine Brennan, USA Today columnist and author of Best Seat in the House

“I called every play in the years described here. Now I walk away from reading Adam Lazarus’s wonderful Hail to the Redskins with a better perspective on how that magic actually happened. Hail to Adam Lazarus for a job well done!” — Frank Herzog, Washington Redskins' play-by-play announcer, 1979-2004

“Offers a guided oral history of the Washington football dynasty that lasted from 1981 to 1992; the narrative is punctuated by scores of quotes from leading participants. ... Lazarus’s rich subject will be of interest to football fans.” — Library Journal

“Summons the days when the fan base was a rabidly loyal metropolis. ... [Lazarus] gets at something fundamental about those teams.” — Washingtonian

Adam Lazarus is a member of the Professional Football Writers of America and the author of three previous sports books, including Best of Rivals: Joe Montana, Steve Young, and the Inside Story Behind the NFL's Greatest Quarterback Controversy. His writing has appeared in ESPN The Magazine, the Atlanta Journal-Constitution, Bleacher Report, and USA Today. He lives in Atlanta, Georgia, with his wife, Sarah, and sons, Aaron and Benjamin.