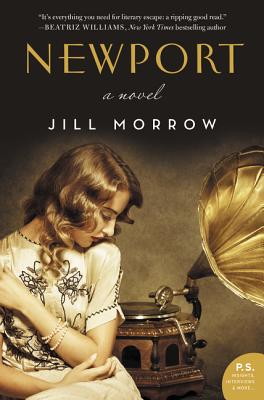 Following in the steps of Beatriz Williams and Amor Towles, this richly atmospheric, spellbinding novel transports readers to the dazzling, glamorous world of Newport during the Roaring Twenties and to a mansion filled with secrets as a debonair lawyer must separate truth from deception.

Spring 1921. The Great War is over, Prohibition is in full swing, the Depression still years away, and Newport, Rhode Island's glittering “summer cottages” are inhabited by the gloriously rich families who built them.

Attorney Adrian De la Noye is no stranger to Newport, having sheltered there during his misspent youth. Though he’d prefer to forget the place, he returns to revise the will of a well-heeled client. Bennett Chapman's offspring have the usual concerns about their father's much-younger fiancée. But when they learn of the old widower’s firm belief that his first late wife, who “communicates” via séance, has chosen the beautiful Catherine Walsh for him, they’re shocked. And for Adrian, encountering Catherine in the last place he saw her decades ago proves to be a far greater surprise.

Still, De la Noye is here to handle a will, and he fully intends to do so—just as soon as he unearths every last secret, otherworldly or not, about the Chapmans, Catherine Walsh . . . and his own very fraught history.

A skillful alchemy of social satire, dark humor, and finely drawn characters, Newport vividly brings to life the glitzy era of the 1920s.


Praise For Newport: A Novel…

“Past and present collide in 1920s Rhode Island as long-buried secrets begin to come to light in this mesmerizing novel of love, loss, and redemption. Beautifully written and vividly detailed, Newport is an elegant and mysterious tale that will keep you entranced from beginning to end.”
— Ashley Weaver, Edgar Nominated author of Murder at the Brightwell

“Newport has it all: intrigue, scandal, and séances to summon a spirit that will not rest. The slow unraveling of tangled secrets will keep you turning pages long into the night.”
— Deanna Raybourn, New York Times bestselling author

“Jill Morrow’s NEWPORT is a portrait of a long-lost era, a sophisticated drama, and a gripping mystery all in one. Full of delicious prose and surprising twists, this book is a delight, an engrossing read that goes down like a glass of the finest champagne.”
— Simone St. James, author of The Other Side of Midnight

“A delicious plunge into the gilded lives and mansions of another era, NEWPORT sends you swimming through an intricate mystery involving money, tragedy, bittersweet love affairs, and voices from beyond, until you arrive at the whirlwind ending. It’s everything you need for literary escape: a ripping good read.”
— Beatriz Williams, New York Times bestselling author of A Hundred Summers

Jill Morrow has enjoyed a wide spectrum of careers, from practicing law to singing with local bands. She holds a bachelor's degree in history from Towson University and a JD from the University of Baltimore School of Law. She lives in Baltimore.

At the beginning of the novel, Adrian keeps tight control over his passions and emotions. Why does he do this, and what allows him to finally let those defenses fall?

Catherine leaves Adrian as an act of love. Had she stayed, do you think their marriage would have been successful? Would they have been happy with each other?

What might Jim’s life have been like had Adrian not stepped in to help fund and mold his future?

Bennett Chapman has been belligerent, self-centered, and ill-behaved throughout most of his life. Why, then, is he so willing to believe that his wife, Elizabeth, has come back from the dead to contact him via se´ance? Why is he determined to follow her directives?

As you read, did you believe that Mrs. Chapman was indeed appearing in spirit, or were you skeptical? At what point did you feel that perhaps this was real? Or did you still have any doubts at the end?

Catherine’s plan to quickly snag a wealthy husband in Newport seems rather a long-shot. What compels her to try it? What other choices were open in her situation to a woman of her social status? What were the potential outcomes to those choices?

Catherine obtains the key to Nicholas’s incriminating documents through uncharacteristic physical contact with him after her wedding ceremony. Do you think Adrian knew of her plan?

Have you ever attended a se´ance or received a psychic reading? If yes, what made you go and what was the experience like? If no, is this something you would ever want to do? Why or why not?