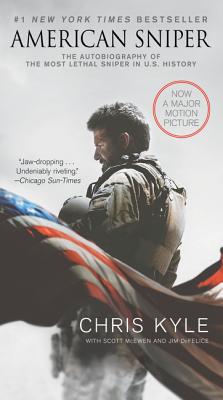 
Praise For American Sniper [Movie Tie-in Edition]: The Autobiography of the Most Lethal Sniper in U.S. Military History…

“Chris Kyle tells his story with the same courage and grit he displayed in life and on the battlefield. American Sniper is a compelling read.” — CLINT EASTWOOD

“In the elite community of warriors, one man has risen above our ranks and distinguished himself as unique. Chris Kyle is that man. A master sniper, Chris has done and seen things that will be talked about for generations to come.” — MARCUS LUTTRELL, author of Lone Survivor

“Chris Kyle was incredible, the most celebrated war hero of our time, a true American hero in every sense of the word.” — D Magazine

“The raw and unforgettable narrative of the making of our country’s record-holding sniper, Chris Kyle’s memoir is a powerful book, both in terms of combat action and human drama. Chief Kyle is a true American warrior down to the bone, the Carlos Hathcock of a new generation.” — CHARLES W. SASSER, Green Beret (US Army Ret.) and author of One Shot, One Kill

“Reads like a first-person thriller narrated by a sniper. The bare-bones facts are stunning. .... A first-rate military memoir.” — BOOKLIST

“American Sniper is the inside story of what it’s like to be in war. A brave warrior and patriot, Chris Kyle writes frankly about the missions, personal challenges, and hard choices that are part of daily life of an elite SEAL Sniper. It’s a classic!” — RICHARD MARCINKO (USN, Ret.), First Commanding Officer of SEAL Team Six and #1 bestselling author of Rogue Warrior