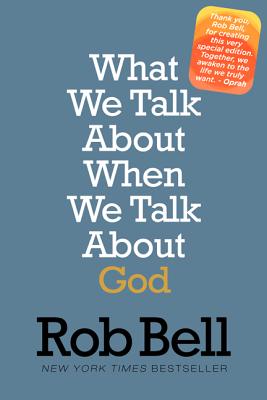 The smash bestseller with a new preface by the author in a special tie-in edition to Rob Bell’s talk during Oprah's “The Life You Want” Fall 2014 arena tour.

What We Talk About When We Talk About God: A Special Edition includes a new preface in which Rob talks about the book, how it has touched so many lives—opening minds and dialogues—and transformed his own.

In this instant classic, Rob offered us a new way to talk about God. He does here for God what he did for heaven and hell in Love Wins: he shows how traditional ideas have grown stale and dysfunctional and reveals a new path for how to return vitality and vibrancy to how we understand God. Bell reveals how we got stuck, why culture resists certain ways of talking about God, and how we can reconnect with the God who is with us, for us, and ahead of us, pulling us forward into a better future—and ready to help us live life to the fullest.

“Bell is at the forefront of a rethinking of Christianity in America.”
— TIME

“[Bell is] one of the most influential Christian leaders in the country.”
— The New Yorker

“One of the country’s most influential... pastors.”
— New York Times

“Time and again, Bell challenges the reader to be open to surprise, mystery and all of the unanswerables contained within the ‘wide stream’ called Christianity.”
— Christian Century

“Behind Bell’s easy-to-read approach is a deeper sensibility, a heavier theological hand, than in any of Bell’s previous works. . . . This book will be a welcome breath of fresh air in a spiritual haze.”
— Publishers Weekly

“Twenty years from now, we may look back from a radically new evangelicalism and see Rob Bell at the center of the shift. . . . Bell has never been afraid to push the envelope on what we know–or think we know–about God.”
— Relevant Magazine

“What We Talk About When We Talk About God challenges conventional notions of God as an otherworldly divine being set apart from humanity, opposed to science and insistent on a conservative interpretation of the Bible. Instead, Bell argues that God is more clearly perceived during moments like, well, surfing.”
— Orange County Register

“Rob Bell’s new book is good news for people who want nothing to do with religion. However, it may be even better news for those of us who are deeply committed to the faith but see that religion is way off track.”
— Mennonite World Review

“With a smattering of pop culture references and bits of humor, Bell makes an argument that will appeal to believers looking for more rational conversations about God. . . . Bell’s fans will find much to ponder and enjoy.”
— Library Journal

Rob Bell is a New York Times bestselling author, speaker, and spiritual teacher. His books include Love Wins, How to Be Here, What We Talk About When We Talk About God, Velvet Elvis, The Zimzum of Love, Sex God, Jesus Wants to Save Christians, and Drops Like Stars. He hosts the weekly podcast The Robcast, which was named by iTunes as one of the best of 2015. He was profiled in The New Yorker and in TIME Magazine as one of 2011’s hundred most influential people. He and his wife, Kristen, have three children and live in Los Angeles.