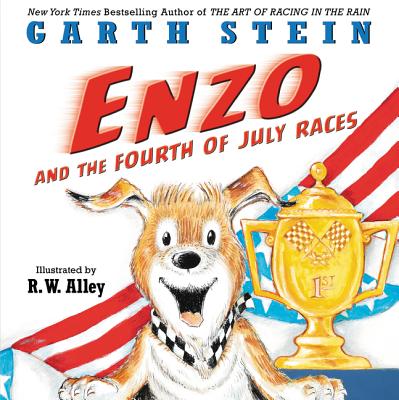 Enzo and the Fourth of July Races

Garth Stein, the New York Times bestselling author of The Art of Racing in the Rain, returns with the newest addition to the Enzo picture book series, Enzo and the Fourth of July Races. Stein captures the excitement of the Fourth of July and the thrill of a car race as Enzo, Zoë, and Denny team up for the biggest race of the year.

For Enzo, the Fourth of July means three things: fireworks, family, and car races! This year Zoë is finally old enough to compete in the Kids’ Kart Challenge. But when one of the boys at the track says that girls aren’t fast drivers, Zoë gets nervous and backs out of the race. Enzo knows it’s up to him to help his family regain the confidence to compete on the big day.

R. W. Alley has illustrated a number of books featuring Paddington Bear. He lives in Barrington, Rhode Island, with his wife, author Zoë B. Alley.