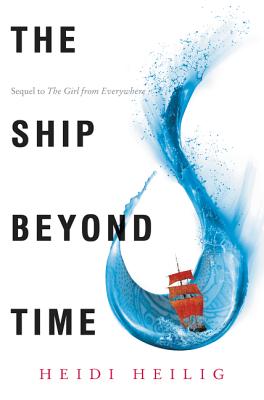 The Ship Beyond Time

The breathtaking sequel to the acclaimed The Girl from Everywhere.

“Fresh and exciting . . . truly the perfect playground for adventure.”—NPR.org

Nix has spent her whole life journeying to places both real and imagined aboard her time-traveling father’s ship. And now it’s finally time for her to take the helm. Her future lies bright before her—until she learns that she is destined to lose the one she loves.

Desperate to change her fate, Nix sails her crew to a mythical utopia to meet another Navigator who promises to teach her how to manipulate time. But everything in this utopia is constantly changing, and nothing is what it seems. Not even her relationship with Kash: best friend, thief, charmer extraordinaire.

Heidi Heilig weaves fantasy, history, and romance together to tackle questions of free will, fate, and what it means to love another person. At the center of this adventure are extraordinary, complicated, and multicultural characters who leap off the page, and an intricate, recognizable world that has no bounds.

This sequel—and conclusion—to The Girl from Everywhere includes five black-and-white maps of historical and mythical locations. Fans of Leigh Bardugo, Sabaa Tahir, and Outlander will be swept away.


Praise For The Ship Beyond Time…

“With her deft touch, Heilig re-immersed me in her world of maps and out-of-time misfits in an adventure with greater stakes, more time-travel tricks and a love story that defies the laws of the universe itself. Heilig could give Dr. Who a run for his money.”
— Alwyn Hamilton, author of Rebel of the Sands

“This artfully constructed sequel to The Girl from Everywhere does not disappoint, with even more romance and adventure than in the first installment....[A] thrilling, layered maritime fantasy...Recommend both titles to fans of Alexandra Bracken’s “Passenger” books and Rick Riordan’s mythology-inspired fiction.”
— School Library Journal (starred review)

“Time traveling Nix Song, 16, is back, and fans of The Girl from Everywhere will be delighted. ...well worth adding to collections that have the first title.”
— Booklist

“Time travel is a challenging trope to reinvent in a way that feels fresh and exciting, and Heilig succeeds with a flourish. ...the premise of these books is truly the perfect playground for adventure.”
— NPR.org