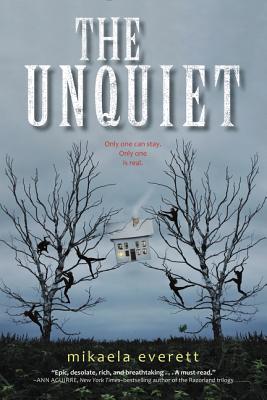 For most of her life, Lirael has been training to kill—and replace—a duplicate version of herself on a parallel Earth. She is the perfect sleeper-soldier. But she's beginning to suspect she is not a good person. Fans of eerily futuristic and beautifully crafted stories such as Never Let Me Go, Orphan Black, and Fringe will find themselves haunted by this unsettling debut.

The two Earths are identical in almost every way. Two copies of every city, every building, even every person. But the people from the second Earth know something their duplicates do not—two versions of the same thing cannot exist. They—and their whole planet—are slowly disappearing. Lira has been trained mercilessly since childhood to learn everything she can about her duplicate, to be a ruthless sleeper-assassin who kills that other Lirael and steps seamlessly into her life.

An intricate, literary stand-alone from an astonishing new voice, The Unquiet takes us deep inside the psyche of a strong teenage heroine struggling with what she has been raised to be and who she really is.


Praise For The Unquiet…

“Epic, desolate, rich, and breathtaking... The Unquiet is unforgettable, and Lirael is a haunting heroine. This one is a must-read.”
— Ann Aguirre, New York Times-bestselling author of the Razorland trilogy

“A slow-burn type of novel…[Lira’s] lack of any inclination towards heroism…makes her a fascinating character, especially among the valiant Katniss lookalikes found in so many dystopias.”
— Bulletin of the Center for Children’s Books

Mikaela Everett has lived all over the world, from Africa to Australia, and now lives in Alberta, Canada. She graduated from university in 2011, with a degree in biological sciences. This is her first book.