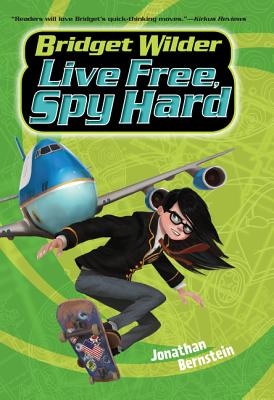 Super-spy Bridget Wilder goes from middle school to the White House on an undercover mission to rescue the president’s daughter in the conclusion to this hilarious, action-packed series.

As a CIA super-spy, Bridget Wilder protects famous boy bands, rescues cooking contest contestants, and tackles evil villains at school assemblies. So when the President’s daughter is kidnapped on the campaign trail, Bridget goes undercover to stop a malicious plot to seize control of the United States of America.

But when saving the country means sharing her secret identity—with her mom!—Bridget’s double-life is threatened. Is this super-spy about to get super-grounded or will Bridget Wilder survive to spy another day?

Praise for BRIDGET WILDER: SPY TO THE RESCUE: “Bridget adapts quickly to the many obstacles and villains thrown her way in the book’s rapid-fire action scenes. Readers will love Bridget’s quips and quick-thinking moves. Over-the-top action that will keep readers turning pages.”
— Kirkus Reviews

“Readers who enjoyed Bridget’s first will devour her second book and start sleuthing for more.”
— Booklist

Praise for BRIDGET WILDER: SPY-IN-TRAINING: “An ideal spy romp for tweens on the verge of teens, with a covert invitation to self-reflection tucked into a fast-paced plot.”
— Bulletin of the Center for Children’s Books

“Readers will surely enjoy this fast-paced escapist story and eagerly await her next adventure.”
— Booklist

Jonathan Bernstein was never a spy—but then that's what someone who actually was a spy would want you to believe. Here's what we do know: He writes books, magazine articles, and movies. He was born in Scotland and lives in Los Angeles. This is his first middle grade novel. Everything else is classified.