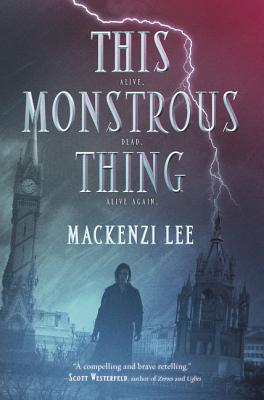 A wildly creative Gothic fantasy retelling of Frankenstein, This Monstrous Thing is a wholly new reimagining of the classic novel by Mary Shelley and is perfect for fans of retellings such as Cinder by Marissa Meyer, fantasy by Libba Bray and Cassandra Clare, and alternative history by Scott Westerfeld.


Praise For This Monstrous Thing…

The old and new are woven together in language and theme creating a solid tale that explores what it means to be human. Part homage to a sci-fi original, part re-imagining, plenty of teen torment and trouble—an absorbing read. — Kirkus Reviews

The adeptly paced and well-written story reveals the troubled relationship between two brothers and how their choices can either destroy or make them stronger. Full of action, mystery, and suspense, this reimagined classic will not disappoint readers of gothic, steampunk, and historical fiction. A satisfying tribute to Shelley’s monster tale. — School Library Journal

A compelling and brave retelling of the first science fiction novel. A secret history, a love story, something both old and new. — Scott Westerfeld, author of Zeroes and Uglies

Mackenzi Lee’s This Monstrous Thing is simply beautiful. It pulses with electricity, mystery, and heart and brings to life one of my all time favorite tales with an unexpected twist. — Danielle Paige, New York Times bestselling author of Dorothy Must Die and The Wicked Will Rise

A richly imagined tale of two brothers and a dark science that twists everything I thought I knew about Frankenstein. A monstrously good read! — Megan Shepherd, author of The Madman’s Daughter series

In her debut, Lee has crafted an intriguing premise that will easily satisfy gothic horror and steampunk fans. — Booklist

Retellings of classics can be hit-or-miss undertakings, but in Lee’s masterful prose, this macabre novel is charged with unmistakable signs of life. — The Horn Book

Richly imagined and ingeniously plotted, this version incorporates quotations from Shelley’s text while updating the perennial questions of the original regarding how far is too far when it comes to meddling in the affairs of life and death. — Bulletin of the Center for Children’s Books

Mackenzi Lee holds a BA in history and an MFA from Simmons College in writing for children and young adults. Her short fiction and nonfiction have appeared in Atlas Obscura, the Boston Globe, Crixeo, and the Newport Review, among others. Her debut novel, This Monstrous Thing, won the PEN New England–Susan P. Bloom Children’s Book Discovery Award. Her second book, The Gentleman’s Guide to Vice and Virtue, was a New York Times bestseller and an ABA bestseller, earned five starred reviews, was a #1 Indie Next Pick, and received a 2018 Stonewall Book Award Honor and a New England Book Award. She loves Diet Coke, sweater weather, and Star Wars. On a perfect day, she can be found enjoying all three. She currently calls Salt Lake City home.